Name, age: Well, my name is Matthew K. Smith, also known as Smitty and SMIDI to my fellow members in the Bluecoats. I am 19 years old. What corps are you in and what is your role this summer? I am returning for my third of five summers with the Bluecoats, continuing my role as a member of the front ensemble playing marimba. 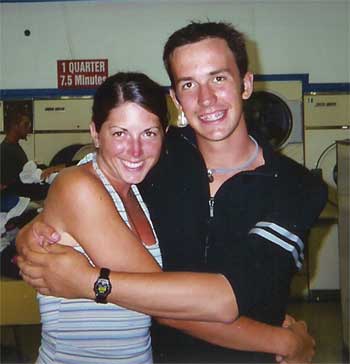 Matt Smith (right)
Give us your full drum corps/marching music background. I started my marching music career during my freshman year of high school at Novi High School in Michigan. I spent my first two years, both fall and winter seasons, in the pit. I chose a different path my junior year and was a part of the bass drum ensemble. I came back to the pit as section leader my senior year for the fall and assisted in teaching the winter season, due to drum corps. I made the Bluecoats front ensemble for the 2003 season when I was 17 and have enjoyed every minute of it. I have also assisted in teaching front ensembles for a few Michigan high school bands. I also served as a member of the University of Michigan drum line in the bass drum ensemble this past fall. How did you decide to be a member of your corps? What made me decide to be a member of the Bluecoats are the quality of shows put on by the organization, the unbelievably talented staff that has pushed me as a performer, and the amazing alumni and current member support of the organization. The Bluecoats is my family, I am treated like family. There was never any negativity from any staff or marching member, which told me I want to be a Bluecoat. What first attracted you to the drum corps activity? I was attracted to the activity for the sheer excitement surrounding the activity. I wanted to perform in finals, for thousands of people. To feel an overwhelming rush of accomplishment and know you just played the best show you could. To push my limits and enjoy what truly makes me happy, playing marimba, all summer long. What advice would you give to young people who want to march? The best advice I have for young people who want to march is practice, practice, practice. The staff is looking for somebody who is pushing himself and wants a spot more than anybody else in the corps. Enjoy yourself, and remain positive. A positive member will rehearse better individually and will help in keeping the atmosphere of the rehearsal enjoyable. Last but not least, MAX IT OUT! Never shortchange yourself in any rep. Consistency creates results. Do you have any favorite road anecdotes? My favorite road anecdote would have to be going swimming while the rest of the corps was at rehearsal. The percussion section was finishing up sectionals and Mac asked the people at the pool if they could remain open for about 15 more minutes and the entire section ran to the pool to go swimming. After swimming, we had dinner, and the rest of the corps was jealous when they saw us dripping wet, and they knew it wasn't sweat. The last good book I read:I am in the process of reading the book "Driven to Distraction." The last great film I saw: The last great film I saw was "Closer" Where I go to school and what I'm studying: I am currently a sophomore at the University of Michigan studying percussion performance with teacher certification and a minor in biological anthropology. Jobs I have/have had: In high school I worked as a busser and waiter at Maisano's Italian Restaurant and I currently work for my university setting up for campus ensembles. Three albums I'd want on a deserted island: Three CDs I would like with me on a deserted island would be Scheherazade, Bartok's Concerto for Orchestra and the percussion bus hype CD. My favorite TV show: "Will and Grace" by far, but "The OC" comes in at a close second.

How do you "blow off steam?" I blow off steam by dancing to music or go for a walk. But mostly I dance, I love to dance. What has been your formative drum corps moment? The Toledo show this past summer. Our corps went out and laid down a great show. The crowd was going crazy right after the intro. That is why I am a performer, and that is why I do drum corps. To hear the crowd going crazy gives you such a rush. Best drum corps show ever: 2004 Bluecoats by far. What are you most looking forward to about the summer? Performing as a top-six corps, the new show, the tan (not going to lie), and most importantly, the friendships that await me on the road. Best thing about being in a drum corps: The friendships that I have now are the best thing. The tan is always nice, as are the memories and the experience of a lifetime. You cannot find an opportunity like this anywhere else. It is one of a kind. Worst thing about being in a drum corps: Money. Not making money over the summer does not make the school year easier me. It is so hard to come back to college and try to pay for books, food and clothes. During tour, the best part of the day is: The performance. The accumulation of every minute of rehearsal. To put all the hard work, blood, sweat and tears under the stadium lights and show the crowd why I do drum corps.

During tour, the worst part of the day is: Loading the truck. We have to wait until the entire corps is loaded and the contras are loaded until we can load our truck. To load our truck is such a tedious process and has to be done very carefully. We are the last to eat and the last to shower. We never have a time to rest until we are leaving for the show, the pit is always going. Oh, and pushing to ensemble, ESPECIALLY in hell weeks. Favorite drum corps personality and why: Erin Rigelman, by far. She spent four years with the Bluecoats, THREE as the center snare and percussion captain. She is an amazing leader, an amazing person, a fantastic snare drummer, and one of my BEST friends EVER! Her love for the Bluecoats is priceless and intangible. So many people in the corps have looked to her for guidance and as a role model. I have never seen her show a weak side any day of the past two summers, which helps drive the percussion ensemble. She is THE ideal representation of the Bluecoats, I think, and words can not express how much I am going to miss performing with her this coming summer. What I want to be when I "grow up": I would either like to be a high school band director, or on the conducting faculty at the university level. Describe what you think a typical DCI show will look in 2015. This is a difficult one. Original music will be more popular. Faster tempos. Harder drill. More ensemble weapon features in guard. Maybe props will make a surge back. Music will be far harder.