Name, age, hometown: Matthew Hayes, 18, Havertown, Pa. What corps are you in and what is your role this summer? I march with the Crossmen, and I play contra. Give us your full drum corps/marching music background. I marched Crossmen in 2004, and this will be my second season with them. I was in high school band for four years as well. 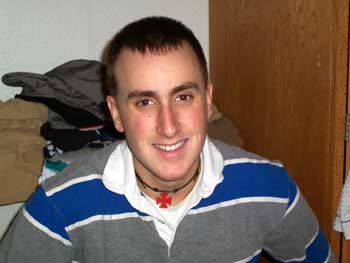 Matthew Hayes
How did you decide to be a member of your corps? My band director in high school actually suggested that I try out. I had no clue what it was before, until he sort of explained it to me. What first attracted you to the drum corps activity? I actually didn't really much about it, but I think I saw DCI finals on PBS in 2001, and really liked what I saw. I never thought that I would be a marching member though! What advice would you give to young people who want to march? I would say, practice, practice, practice! If you audition and don't make it, you can always audition again. Don't quit, and be persistent! The last good book I read: Haha. "Macbeth" by William Shakespeare. I read it for my high school English class. The last great film I saw: That's easy. "Napoleon Dynamite" was hilarious! Where I go to school and what I'm studying: I go to Penn State University, and I am a marketing major. Jobs I have/have had: In high school, I worked at CVS Pharmacy. Soon after that I got a job at Staples working in the copy center. It was the most fun I've ever had working at a part-time job. Right now, I work at PSU's student union building, working at Sbarro's and Chick-fil-A. Three CDs I'd want on a deserted island: I'm gonna go with DCI Finals (2004), "Before These Crowded Streets" (Dave Matthews Band) and "Make Yourself" (Incubus). My favorite TV show: "Family Guy!" That show is so hilarious, and I like the crude humor that goes along with it. Favorite performers: Dave Matthews. I really enjoy his music, and he's my favorite singer/artist. How do you "blow off steam?" I go running when I'm stressed. I don't know how many miles I've ran over the course of the year because of homework/projects. What has been your formative drum corps moment? Performing for the 4huge crowd in Denver. I had been questioning if I wanted to march again, and that answered my question right there. Also, coming home, looking myself in the mirror and telling myself, "I did my best, and that's all I ask for." Best drum corps show ever: Toughie -- I really like 1989 SCV. But then again, who doesn't? What are you most looking forward to about the summer? I'm looking forward to spending time with 134 other great people who love doing my favorite extracurricular activity. Best thing about being in a drum corps: Performing for thousands of people over the season -- getting a standing ovation (hopefully!) and just knowing that I am getting something positive out of it. Worst thing about being in a drum corps: I would say the massive amounts of practice. During tour, the best part of the day is: Doing the full run-through at the end of practice, and if it's a show day, then performing the show for an audience. During tour, the worst part of the day is: Waking up! Favorite drum corps personality and why: Al Chez. He volunteers a lot with the Crossmen, and I like to watch him on TV. What I want to be when I grow up: I'd like to work in advertising, or market research. If I get a job as a financial analyst though, I'd gladly take that. Describe what you think a typical DCI show will look in 2015. It'll still be as fast and innovative as it is in 2005. I think it'll be the exact same thing, with the same instruments and the same willing, determined young people who do it today. Feel free to add anything else you'd like. I would like to say, I can't think of any other activity that is so rewarding, while still requiring intense amount of physical, mental and emotional strength. I'm honored to be a part of a wonderful organization such as the Crossmen that can provide me with the experiences that I had, and will have in years to come.