Name, age, hometown: Michael Krueger, 20, Spring, Texas. What corps are you in and what is your role this summer? I'm in the Cavaliers, and I will be marching tuba/contra this summer. Where I go to school and what I'm studying: I go to the University of Houston where I am studying music education. 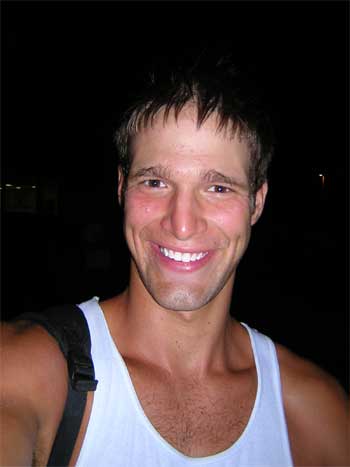 Michael Krueger
Give us your full drum corps/marching music background. This is my third summer with the Cavaliers. I first learned to march in the Spring High School marching band in the fall of 1999. And for fun, I march in the Spirit of Houston Cougar Marching Band. What does your ideal free day consist of? Sleeping in (not too late), eating really good food (Chicago-style pizza perhaps), watching a movie, seeing places I've never seen before, and next summer I'll be having a couple drinks.

In the shower you can hear me singing: Sublime The last good book I read: "Blue Like Jazz: Nonreligious Thoughts on Christian Spirituality" by Donald Miller

Jobs I have/have had: I was a cashier at Big Lots, and now I teach private tuba lessons at a few schools, and I teach my former with marching band (Spring). My favorite TV show: "Family Guy" What has been your formative drum corps moment? The night I received my white gear. What would you be doing next summer if you were not marching? Summer school and working. How did you decide to be a member of your corps? I saw the Cavaliers live in 2002, and they were amazing. What first attracted you to the drum corps activity? I happened to go see a show without really knowing anything about the activity. What advice would you give to young people who want to march? Go for it. There's nothing like it in the world, and you can only enjoy it for a limited time. What I want to be when I "grow up": I would like to be a band director who plays a few small gigs on the side.

Favorite drum corps personality and why: If you're asking for a person, I'd say Sly, our visual caption head, because he's generally laid back (unless you can't hack it), he's funny, and he tells some of the best stories. Not to mention that he's amazing in his profession. Best drum corps show ever and why: I have to say the Cavaliers in 2002 because it was the first time I had ever seen drum corps, and it was just an awe-inspiring show performed at an extremely high level. The year is 2030. What does a DCI show look like? You know, I'd like to say that it's basically the same. Hopefully, there are still no props and no synthesizers. I'd bet that the Cavaliers will still look good. Hopefully, the stadiums are even bigger on finals night.