Name, age, hometown: Noel Benitez, 20, Delano, Calif. What corps are you in and what is your role this summer? I recently made the Santa Clara Vanguard and I'm in the color guard. Where I go to school and what I'm studying: I am attending Bakersfield College in Bakersfield, Calif., and my major is nursing. 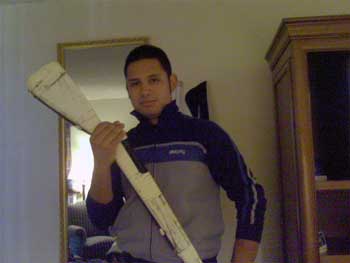 Noel Benitez
Give us your full drum corps/marching music background. I started in the Delano High School Marching Band playing clarinet. Once there I was introduced to color guard, not knowing what it was. I fell in love. I was in the band during field season and I was in winter guard during the winter. Delano High School had a very successful color guard so it led me to keep marching. I marched with Rhapsody Independent winter guard during the '05 season, and I went on to march the Santa Clara Vanguard Cadets for the summer of '05. Now I have recently become part of the Santa Clara Vanguard for the summer of '06. What's your personal practice schedule like? Well, I go to school during the mornings and I teach during the night at two different schools, Delano High and Centennial High. During the summer, I have a schedule of practicing throughout the whole day. What does your ideal free day consist of? Hmm -- resting. Favorite pig-out food: I would have to say Chinese food, and if I were in Santa Clara, world wraps from EL Mercado, hehe. And, of course, my daily shot of Starbucks coffee. In the shower you can hear me singing: Pretty much Mariah Carey. The last good book I read: "Angels and Demons" by Dan Brown. The last great film I saw: "Memoirs of a Geisha" Jobs I have/have had: Well, I am currently one of the color guard coaches for Centennial High School and Delano High School. I've also worked as a marching consultant for the Delano High marching band, and I've also been a movement consultant for the Delano High percussion ensemble. And soon enough, I might have the opportunity to use my certified nursing assistant certificate. My favorite TV show: "Will and Grace," of course. Hehe. What has been your formative drum corps moment? Going into a stadium with only a few people and still giving it my all, as if there were millions watching. Performing is something I love and will always enjoy, and performing for anyone is always memorable for me. What would you be doing next summer if you were not marching? Probably teaching color guard for summer camps, and going to school for my nursing degree. How did you decide to be a member of your corps? I have always been amazed by Vanguard, and when I had the opportunity to march for the Vanguard Cadets I was honored. I had heard so many good things about the organization, and now I know why: Great environment, great staff and a GREAT family. What first attracted you to the drum corps activity? I just thought it would be amazing to be a part of such a great production and sport. What advice would you give to young people who want to march? Don't be scared, you have no idea how much fun hard work can be. It will be one of the most cherishable moments in your life, and you should go for it. What I want to be when I "grow up": Well, I am currently working on my nursing degree, and if it all works out well, in a couple of years I will be a registered nurse. I do want to invest, though, and I would like to start my own restaurant and maybe even a dance studio. There I would offer dance lessons, color guard lessons, singing lessons and various other things. I want to explore. What I really want to be when I grow up is to know that I have enjoyed every single bit of life. Best drum corps show ever and why: Santa Clara Vanguard's "Phantom of the Opera" (1989). The year is 2030. What does a DCI show look like? Well first of all, it will be in an indoor stadium. Haha. And because everything will have been done before, corps will start going back to traditional shows, kind of like we have today. Feel free to add anything else you'd like. Drum Corp is truly something special, something close to my heart. I'm glad to be a part of such a great organization.