Olin Johannessen grew up in Portsmouth, N.H, and is the percussion section leader of the Boston Crusaders as well as the pit section leader. He attends the University of Massachusetts-Amherst, and is a music major. A busy man at college, Johannessen performs with the wind ensemble, the percussion ensemble, the contemporary keyboard ensemble, and the Minuteman marching band. Not satisfied with his musical resume? There's more. "I also arrange music for the Minuteman Hoop Band, our 70-piece basketball band (really just a huge big band with an enormous book of tunes). On the side, I also have an '80s pop cover band comprised of a bunch of my great friends and myself," Johannessen said. 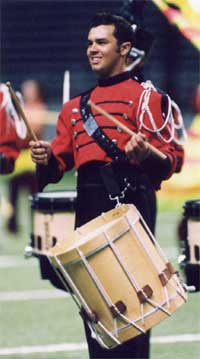