Name, age, hometown: My name is Paul Black, I am 19 years old, and I'm from Carrollton, Texas. What corps are you in and what is your role this summer? I am playing first mellophone in the 2005 Madison Scouts. 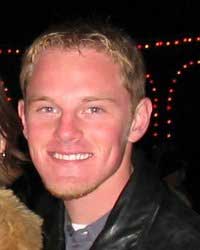 Paul Black
Give us your full drum corps/marching music background. I marched four years in the marching band at Newman Smith High School then marched in the 2003 Madison Scouts and plan on staying there until I age out. How did you decide to be a member of your corps? I wanted to be in a corps that had lots of history and where the emphasis was on being a crowd-pleaser. My assistant band director in high school marched Madison Scouts in 1995 and told me about all the great times he had with his corps. What first attracted you to the drum corps activity? Watching the DCI show at Lake Highlands in Dallas my freshmen and sophomore years of high school. What advice would you give to young people who want to march? Actively try to find out which corps, whether it be Division I, II or III, fits your personality. The corps that clicks with you is the place where you are going to have the most fun. Do you have any favorite road anecdotes? Rocking the bus while pulling into the parking lot for the San Antonio regional while the staff bus blasted music out of the emergency escape hatch. Good times. The last good book I read: "The Ultimate Hitchhiker's Guide to the Galaxy" by Douglas Adams. The last great film I saw: "Garden State" Where I go to school and what I'm studying, if applicable: I am a first-year student attending Texas Tech University in Lubbock, Texas, where I'm getting a double major in electronic media and music. Jobs I have/have had: During the summer of '04 I worked as an part-time construction work and day care assistant at my church. Our church moved to a new building which was still being built so I would work with the construction company during the day and would help out at the day care when I had free time. Three albums I'd want on a deserted island: "Center:Live:Roar" by Youngblood Brass Band, a compilation album of Earth, Wind, and Fire, and the "Kill Bill Vol. 1" soundtrack. My favorite TV show: "The Daily Show with Jon Stewart" Favorite performers: Arturo Sandoval, cast of "Blast!", and Ben Folds. How do you "blow off steam?" A big dose of sarcasm. What has been your formative drum corps moment? In 2003, in either Buffalo, N.Y. or Rome, N.Y. (I can't remember which show), we sang "Never Walk Alone" to the woman who organized that particular DCI event for several decades. Best drum corps show ever: 1988 Madison Scouts. What are you most looking forward to about the summer? Singing the corps song with my brothers. Best thing about being in a drum corps: Becoming apart of the history of your particular corps. Worst thing about being in a drum corps: There comes a time when you age out. During tour, the best part of the day is: The best part of the day is when you hear the crowd going crazy at the end of your show. During tour, the worst part of the day is: The worst part of the day is when the crowd stops cheering and you realize you have to do another breathing block run tomorrow. Favorite drum corps personality and why: Sal Salas, because he's like a father to me. What I want to be when I "grow up": I'm not entirely sure yet. Ideally I want to end up working as a sound engineer at Skywalker Sound or get involved in creating the DCI DVDs/CDs. Describe what you think a typical DCI show will look in 2015. All corps will have jet packs and they'll be performing drill in mid-air at 280 bpm.