Name, age, hometown: Paul Rutherford, 20, Dallas What corps are you in and what is your role this summer? I play baritone for the Blue Knights horn line this summer. 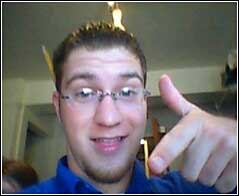 Give us your full drum corps/marching music background. I began as a "band-aid" in '96 for the North Laurel High School Jaguars, while I was still in middle school. I marched saxophone the following year. Later my family moved to Indiana and I marched saxophone with Center
Grove High Sschool for four years. I took the past two seasons off, and decided to learn bari so I could play in a horn line. How did you decide to be a member of your corps? The Blue Knights are a solid corps with a good horn line, plus it was closer to school.

What first attracted you to the drum corps activity? I was at marching band rehearsal after school one day during my first year as a "band-aid" and someone was watching the finals video from 1996. I was enthralled by the Madison Scouts, and it inspired me to march as hard as possible. Since then I've completely fallen in love with marching music. What advice would you give to young people who want to march? If you want to march in DCI then try your local marching band, at your school maybe, and give that a shot. Keep at it. The last good book I read: "Wild at Heart: Discovering the Secret of a Man's Soul" by John Eldredge

The last great film I saw: "Edward Scissorhands" Where I go to school and what I'm studying: I study philosophy at Rice University in Houston Texas. Jobs I have/have had: I am currently a tutor homeless teenagers in Houston. I have also worked ticket sales, and at Penn Station (food). For a few years I had a landscaping company -- and that was good. Three CDs I'd want on a deserted island: None. All music, as such, is worthy of respect. However, some more than others. My favorite TV show: "Frasier" Favorite performers: The Yellowjackets, Michael Buble How do you "blow off steam?" To "blow off steam" I isolate myself and pray and/or meditate. Best drum corps show ever: There are far too many to name. What are you most looking forward to about the summer? I am eager to get our show clean and then show it off several times a week. Best thing about being in a drum corps: The best thing about drum corps, is the unity of spirit. This past weekend I was contemplating how wonderful an activity this is, where we can work towards a common goal, with a consistently self-sacrificing pace, and do it with singularity of purpose. There are select few who are cut out for drum corps in this world, but I'm glad to know those who are. Worst thing about being in a drum corps: Acclimating yourself to a higher threshold of pain. What I want to be when I "grow up": A Christian apologist Describe what you think a typical DCI show will look in 2015. In another seven years, writers will rediscover the utility and beauty of
majorettes, or drill teams as they're sometimes called. You know who they are, they're the ladies clad in sequins to hide their hi-cut bathing suits who twirl the shiny silver batons. Guards will go wild, and in the following three years after, culminating in 2015, guards will have become baton-twirlers in their entirety.