What corps are you in and what is your role this summer? I am a member of Carolina Crown's front ensemble. This year, I am playing marimba. Give us your full drum corps/marching music background. I began marching band in sixth grade and have continued marching throughout my senior year. I began drum corps in the fall of my sophomore year and this summer will be my third year with Carolina Crown. How did you decide to be a member of your corps? My percussion instructor told me that he thought I would enjoy drum corps and that I should try out just to see what the atmosphere was like. I really didn't know much about any drum corps at the time, but he suggested Carolina Crown, so I took his advice. 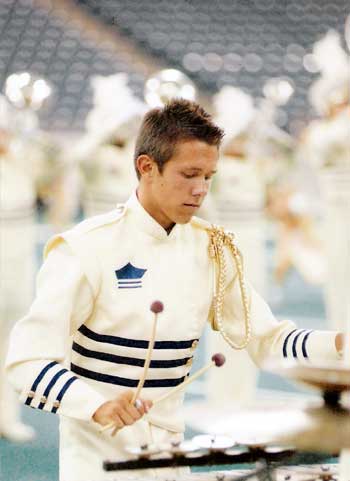 Reid Paxton
What first attracted you to the drum corps activity? I saw my first drum corps show in the summer of 2002, and although I didn't know anything about it at the time, I knew I wanted to be a part of the drum corps activity. What advice would you give to young people who want to march? Don't be scared to audition, because the techs are only there to help you and as long as you make improvements. Even if you don't make the corps, you still have become a better player. Dedication is a big part of corps too, so if you aren't willing to give 110 percent to the corps, then it might not be cut out for you. Do you have any favorite road anecdotes? My favorite memory would have to be during the second stop in Allentown, Pa., in 2004 for the DCI Eastern Classic. For lunch that day the pit decided to go out to eat to a local restaurant. We had a blast and I hope we can do it again this year. The last good book I read: "The Five People You Meet In Heaven" by Mitch Albom The last great film I saw: "Big Fish" Where I go to school and what I'm studying: Currently, I am attending Gilbert High School. This fall, I will attend the University of South Carolina, where I will major in percussion performance. Three CDs I'd want on a deserted island:
"A Sudden Rush of Blood to the Head" by Coldplay
"Rent" by Jonathan Larson
"Best of Gershwin" by George Gershwin My favorite TV show: "The OC" How do you "blow off steam?" I usually play piano until I feel better. What has been your formative drum corps moment? I haven't had one moment that stands out, but the summer of 2004 was probably the most educational for me. The percussion staff for 2004 was awesome, and Mark Teal (our pit tech for '04) taught me so much about how to be a better performer and musician as a whole. A lot of life lessons were learned in '04 as well. Best drum corps show ever: Phantom Regiment 1996 What are you most looking forward to about the summer? Crown is going to be great this summer, and I can't wait to put the entire show together and go on tour. I love performing and I can't wait to get back on the field. Best thing about being in a drum corps: Tour is the best part of corps. I love traveling around to places I've never been before and meeting people from other corps. Worst thing about being in a drum corps: Being away from your home and your shower. During tour, the best part of the day is: Before the show in the lot when everybody is coming to watch you warm up, and all the other corps are pulling up, and you just can't wait to get out on the field. During tour, the worst part of the day is: The rehearsals that last from 1 p.m. 5. Favorite drum corps personality: Tony DiCarlo What I want to be when I "grow up": I want to be a great jazz vibraphonist.