What corps are you in and what is your role this summer? Madison Scouts, second-year mellophone. Where I go to school and what I'm studying: University of Kentucky, music education. 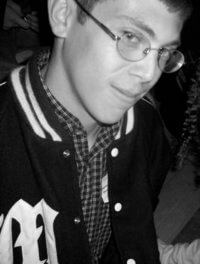 Ross Uber
Give us your full drum corps/marching music background. Greenwood H.S. marching band, charter member of Eklipse in 2003, Madison Scouts 2005-2008. Check out the Madison Scouts on the DCI Season Pass. What's your practice schedule like? Whenever and however I can fit some time in. What does your ideal free day consist of? Bonding with my brothers over great food. Favorite pig-out food: Twizzlers. In the shower you can hear me singing: Anton Bruckner, Percy Grainger, Aaron Copland, you name it.

The last good book I read: "Papillon" by Henri Charrière. The last great film I saw: "Phantom of the Opera" Jobs I have/have had: Last year I worked at a restaurant to pay off corps dues. This year I submitted to a smallpox vaccine clinical research study to pay off corps dues. I also teach visual at Lafayette H.S. My favorite TV show: "Battlestar Galactica." What has been your formative drum corps moment? After a standstill performance at the city of Madison's July 4th Rhythm & Booms festival, we were given the night off to enjoy one of the largest fireworks shows in the world. I realized that I was experiencing life many times greater on tour than I ever could at home. What would you be doing next summer if you were not marching? I would be following the scores religiously every night. How did you decide to be a member of your corps? My high school band visual caption head taught at the Scouts and told me all about it. This corps has "entertaining" written all over it. I wanted to be a part of something that affected audience members, and the Scouts can easily provide that. What first attracted you to the drum corps activity? I found a recording of Vanguard '92 (Fiddler on the Roof) online a long time ago. I didn't know exactly what it was about, but I was hooked. What advice would you give to young people who want to march? Don't be that guy or gal that is always thinking about the past and wondering, "What if ...?" Do this before it's too late. What I want to be when I "grow up": A band director leading the activity. Favorite drum corps personality and why: Michael Cesario. His speeches will make every hair on the back of your neck stand straight up. Best drum corps show ever and why: Madison Scouts '95. The audience members sound like they're going to rush the field and tear down the goal posts. The year is 2030. What does a DCI show look like? Completely different, with homages to the past 58 years of the activity.