Name, age, hometown: Samantha Smith, 18, from Hartsburg, Mo. What corps are you in and what is your role this summer? Colts mellophone Give us your full drum corps/marching music background. Three years of French horn/mello in marching band, three years avid fan of drum corps, and now I'm a rookie. 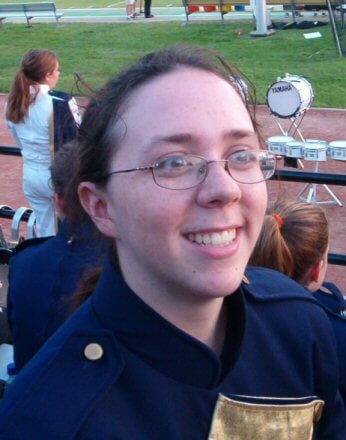 Samantha Smith
How did you decide to be a member of your corps? "American Overture" did it for me, and then in the fall when I was looking at nearby corps, I talked to a lot of people. The Colts struck me as the most tightly-knit, friendly group. What first attracted you to the drum corps activity? The pursuit of excellence -- those amazing sounds and moves, the color and pageantry. The percussion, the horn lines, and especially the guards were so intense, focused, and it produced something jaw-dropping and awe-inspiring. I wanted be part of it, but I definitely wasn't sure I'd be able to handle everything. Joining this relentless pursuit of excellence is difficult, but very much worthwhile. What advice would you give to young people who want to march? Go for it. Do you have any favorite road anecdotes? Getting lost trying to take "shortcuts" to camps has been most interesting. The last good book I read: "Fahrenheit 451" The last great film I saw: "Napoleon Dynamite" Where I go to school and what I'm studying, if applicable: I'm a senior in high school, not sure where I'll be at college yet, but I know it'll be in music education. Jobs I have/have had: Cleaning rooms after school. Three CDs I'd want on a deserted island: A master collection CD of Mozart including all the horn concertos, and then probably a couple mix CDs with the rest of everything I like. My favorite TV show: I'm not a fan of TV, but if the DCI broadcast counts as a TV show, there you go. Favorite performers: In any and all musical ensembles, but especially orchestras and concert bands, above all I just love the horns - the President's Own of the Marine Corps is awesome. How do you "blow off steam?" Pull out my horn, music, fake book, and just jam until I've poured everything into making some random song or concerto perfect. Or I go run and listen to angry music. What has been your formative drum corps moment? At drill camp, everyone's hard work paying off with an appreciative audience -- realizing how much everything will pay off in the end. Best drum corps show ever: I haven't seen that many shows, but going just on shows I've heard, I think Phantom Regiment of 1989 is amazing. What are you most looking forward to about the summer? The experience. Becoming a part of what I've admired. Best thing about being in a drum corps: Being with 100-plus other people in just as much physical pain and mental elation/overload as I'm in, knowing it will all pay off eventually. Worst thing about being in a drum corps: Waking up after a rough night of sleep. Favorite drum corps personality and why: Vicki Schaffer, operations director at the Colts. She's amazing -- she's always got an answer, even if it means helping search out someone else who will know the answer. What I want to be when I "grow up": Most likely a music educator of some variety, but possibly a vet, or some sort of other teacher. Describe what you think a typical DCI show will look in 2015. I think shows might be longer and they'll definitely keep on getting more intense, the guard even more wild -- bigger flags, more color. I think there might be some different music, exploring new varieties, but for the most part I think there will be a return to the roots of the activity.