Name, age, hometown: Scotti Smith, 21, Columbus, Ohio What corps are you in and what is your role this summer? I am the trumpet section leader at Capital Regiment. Give us your full drum corps/marching music background. Westerville South High School Marching Band 1998-2002, RhythmX winter guard 2002-2003, Capital Regiment 2003-2005 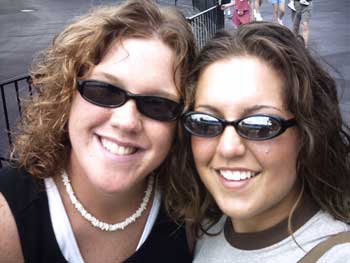 Scotti Smith (left) and Allesandra Souers.
How did you decide to be a member of your corps? I originally auditioned for a different corps but then decided to check out my hometown corps. They welcomed me with open arms, and I knew that from that moment Capital Regiment was my home. What first attracted you to the drum corps activity? I was introduced to the activity in high school when my band director took me to a Blue Grass brass camp, at that same camp they folded. What advice would you give to young people who want to march? I would advise to stay active with your high school program, take lessons, and PRACTICE! Do you have any favorite road anecdotes? I think I would have to say eating chili cheese Fritos and chocolate Teddy Grahams followed by taking pictures of my bus feet! The last good book I read: "The Notebook" The last great film I saw: "Finding Neverland" Where I go to school and what I'm studying: I attend Ohio Dominican University in Columbus. I have one more semester and I will have completed my early childhood education degree. I also have plans to go back to school to get an advanced degree in special education. Jobs I have/have had: I work as a shift supervisor at Steak Escape and I just finished with color guard. I taught Olentangy Liberty winter gaurd, and in the fall I teach Olentangy Liberty High School marching band in brass and visual. Three CDs I'd want on a deserted island: "Blast!", Dave Matthews Band, "Live in Chicago"; Bowling for Soup My favorite TV show: That would have to be a tie between "I Love Lucy" and "Roseanne." Favorite performers: "Blast!" But that shouldn't really be a surprise! How do you "blow off steam?" I don't really know how to answer this one. I keep myself so busy that I don't even think I do! What has been your formative drum corps moment? That would have to be in '04 when we got our corps song. Two of our techs wrote the lyrics and put it to the tune of the Doxology, which was a major part of our '04 show. It was such an emotional moment. When we sang it the first time I remember thinking, "Wow, this is what drum corps is all about!" Best drum corps show ever: Either SCV 1989 or Phantom Regiment 2003. What are you most looking forward to about the summer? Saturday night in Foxboro. Best thing about being in a drum corps: I think drum corps is by far what has changed my life the most. I know that I wouldn't be the same person without drum corps and you meet people that will be your friends for the rest of your life with both staff and members. It is incredible. Worst thing about being in a drum corps: Never sleeping in?! Really, what the worst part for me is leaving my family and friends for the entire summer. I am a family-oriented person and it is hard to leave the ones I love for so long. But in the end, it is worth it. During tour, the best part of the day is: Putting on that Superman outfit and going out there with your brothers and sisters and performing in front of thousands of people day after day. I also love shower time too, that would be my second favorite. It's awesome because that's when us girls vent about whatever is going on. During tour, the worst part of the day is: Hearing the "click, click, click" of the lights followed with, "Good morning Capital Regiment, you have 15 minutes to be ready for stretch and run!" Favorite drum corps personality and why: Jay Bocook by far. No explanation is needed! What I want to be when I "grow up": I want to be a successful person in BOA/DCI. I hope to continue teaching as long as I can. This activity is the best thing that ever happened to me, I want to help give that experience to other kids. Describe what you think a typical DCI show will look in 2015. I can't even imagine how fast they will be marching. Even though I don't agree with this, I see props added to add to GE. I don't really see any changes with the age-out rule. I don't think our bodies would be able to last if we were much older. Feel free to add anything else you'd like. I am starting an indoor brass theatre in Columbus, Ohio. We are hoping to compete in the winter circuits. If you would be interested in becoming a part of this or sponsoring us (we are still looking for instruments) it would be greatly appreciated. We will have a Web site up at the end of the week, but until then the email is fortebrasstheatre@juno.com .