Name, age, hometown: Sean Zanganeh, 20, Poway, Calif. What corps are you in and what is your role this summer? I am in my second year as drum major for Esperanza. Where I go to school and what I'm studying: I am in my last semester at Miramar Community College and will be transferring in the fall. I am completing all my general education courses and plan to go on and study business finance. 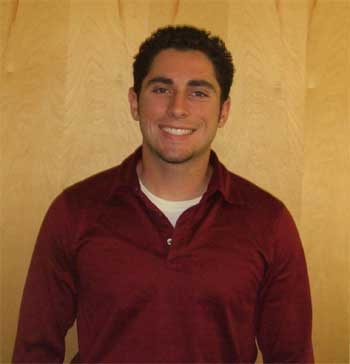 Sean Zanganeh
Give us your full drum corps/marching music background. I attended Poway High School and was in the marching program there all four years of high school. I was in the highest music group there and was apart of the Southern California honor band. I am in my forth year of marching with Esperanza. The first two years I marched, I played baritone. After that season I felt that I had a great deal experience to lead the corps. I interviewed with the director and was chosen to be drum major. Now in my second year as drum major, my whole perspective of the activity has changed for the better. What's your personal practice schedule like? A great deal of the practicing that goes along with being a drum major is done one on one. I spend a great deal of time with the director polishing my conducting technique. The most common practice I do is by myself in front of a mirror. What does your ideal free day consist of? My ideal free day consists of being taken to a place with so much to do that no one ever has any regrets. It is a day without rain because usually on every free day I have ever had, the weather has been terrible. My hopes are high, though, for this year and the journey to come. Favorite pig-out food: Carne or pollo asado burritos. In the shower you can hear me singing: You name it. I sing drum corps, jazz, country, rock, music from whatever school I am teaching at the time. Music moves the soul and singing in the shower is one of my most-favorite activities. The last good book I read: "The Elements of Style" by William Strunk Jr. & E.B. White. The last great film I saw: "Wedding Crashers" Jobs I have/have had: Auto detailer, loan processor, Waterscape salesman, marching tech and advisor for multiple high schools. My favorite TV show: "Laguna Beach." I'm sorry, and I do not care what anyone thinks, but that is the best show. What has been your formative drum corps moment? Entering the field in 2003 at
Division II finals and having the best show of my life. The weather was an extreme concern to all the members and DCI staff, but we still managed to have the best show of our lives. What would you be doing next summer if you were not marching? I don't have to think like that just yet, but I am sure I would be working and getting closer to my real estate license and broker's license. How did you decide to be a member of your corps? I had seen a kid at my high school who was wearing his member jacket and I thought it was the coolest thing. A year later one of my good buddies was going to tryouts and I told him I would go with him. What first attracted you to the drum corps activity? My neighbor was involved in the activity and brought one of the shows over to my house so we could watch what he did in the summer time. After I saw the show I decided that this activity was for me. What advice would you give to young people who want to march? Do not ever think that you are not good enough. There are way too many people out there just wasting their talent away because they think that they are not good enough. What I want to be when I "grow up": Well, I feel that I have grown up so fast and that I am grown up. Now I need to make the decision to pursue what makes me prosperous and happy. Favorite drum corps personality and why: (DCI contest coordinator) Tony DiCarlo is one of my favorite drum corps personalities because he always has something funny and witty to say to me before our corps enters the field. It is always a pleasure to see him at shows. Best drum corps show ever and why: Esperanza's show from 2003. There was nothing more exciting than having the best show of my life. The year is 2030. What does a DCI show look like? In 2030, I see a DCI show looking very much the same as it does now. Like with any other activity it will evolve. There is no doubt in my mind that technology will have a greater part in the drum corps world. I see more electronics and more aids to marching equipment to make it less stressful for the member.