Name, age, hometown: My name is Taylor Sykes, I am 19 years old and I live in Blountville, Tenn. What corps are you in and what is your role this summer? I am a member of the Carolina Crown and I currently play lead trumpet. 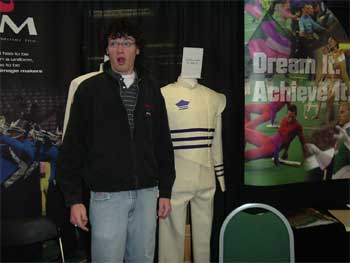 Taylor Sykes
Where I go to school and what I'm studying: I have decided, at my own will, to take a year off before attending college in order to work and save money. I plan on eventually pursuing a degree in music education. Give us your full drum corps/marching music background. I participated in four years of marching band at Sullivan Central High School and began marching with Crown in between my junior and senior year. This will be my third year with Crown. What's your practice schedule like? I try my best to practice at least an hour a day. Sometimes it doesn't always work out like that due to my work schedule -- or I just wake my dad up at 1 in the morning! What does your ideal free day consist of? I like to enjoy the day relaxing with some of my brothers and sisters. Also, a nice, thick steak from Tony Roma's on the San Antonio riverwalk is pretty nice too! Favorite pig-out food: Twizzlers In the shower you can hear me singing: Whatever the random group song of the day happens to be. The last good book I read: "Brave New World" by Aldous Huxley The last great film I saw: "Memoirs of a Geisha" Jobs I have/have had: I am currently a host at Fatz Cafe in Bristol, Tenn. I am about to begin training to be a server. My favorite TV show: "The Colbert Report" What has been your formative drum corps moment? I will never forget receiving my corps jacket on the last night of everydays in 2004. It gave me a sense of pride and accomplishment that I still feel today. What would you be doing next summer if you were not marching? Crying! How did you decide to be a member of your corps? It is the closest Division I corps to where I live. I also did not know very much about what I was getting into -- so anything was alright with me. What first attracted you to the drum corps activity? My high school band director, Rod Dye. He was not fortunate enough to march due to certain circumstances, but his design and technique programs are strongly drum corps-influenced. The students under his direction watch several shows and even attend a show through out the course of the season. He encouraged me to march and inspired me to become a better player right from the very beginning of my high school career. What advice would you give to young people who want to march? Don't be scared and be willing to do whatever it takes to make your dreams come true! What I want to be when I "grow up": I would like to be teaching music in some capacity. Favorite drum corps personality and why: Matt Harloff is my favorite drum corps personality because not only does he bring a wealth of knowledge to the horn line, but he brings an outstanding personality to us as well. He can make us laugh, he can make us cry, he can make us want it even more. There is a reason that we (the horn line) affectionately call Matt "Big Daddy." To me, he is the main foundation of Crown's horn line. Best drum corps show ever and why: Star of Indiana 1991 is the best drum corps show ever for a myriad of reasons, from musical intensity to visual innovation. On the finals recording of that show, (then-Star instructor) Donnie VanDoren can be heard saying "It doesn't get any better than that!" I agree with him! The year is 2030. What does a DCI show look like? As long as I have the honor of still being a part of the activity I don't really care! I hope that corps continue to push the envelope of innovation without getting too far away from the basic principals of what drum corps is. Feel free to add anything else you'd like. I would like to express my sincere gratitude to those that have supported the Crown organization and made it possible for us to achieve at our highest level in the corps history. It is such an honor and a privilege to be apart of a highly talked about "up-and-coming" brass dynasty and I would like to ask those of you that support Crown to continue doing so. Best of luck to all in the 2006 season. Let the drum corps begin!