Name, age, hometown: Tiago Rodrigues Forin, turning 21 this May, Pompano Beach, Fla. What corps are you in and what is your role this summer? The Glassmen. Mellophone player 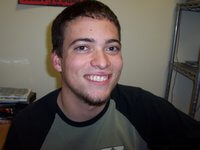 Tiago Rodrigues Forin
Give us your full drum corps/marching music background. I began my marching music background in 1998 as a flute player for the "Spirit of the Bucks" Marching Band of Deerfield Beach High instructed by Crossmen alum Jeff Bridges. I never played a wind instrument (I used to be a string player) until then. Next marching season I played mellophone and performed Robert W. Smith's "Africa" and I was hooked on playing brass. I began marching drum corps in 2000 with the Crossmen as a mello player. I returned in 2001 as a soprano and I continued to march with them in 2002 and 2003 as a mello player. In 2004, due to special circumstances, I became a member of the Glassmen as a trumpet player late in the season. How did you decide to be a member of your corps? In 2004 I had to do summer school in college, but when I got out I went looking for holes to fill. My former caption head, Dean Musson, offered me the chance to fill a trumpet hole for the Glassmen and I took it. It was a different experience than what I had in the past, but I loved every second I was with the Glassmen. I was swept off my feet so I decided to age-out with them this season. What first attracted you to the drum corps activity? Some of my high school friends marched with the Boston Crusaders in 1999 and they brought back videos of drum corps. The first corps I ever saw was Cadets '99 on video. Since it was my first year playing mello, hearing and seeing that mello section perform made my jaw drop. After talking to my friends about the their tour, I decided that I should take part in this activity. What advice would you give to young people who want to march? No matter what happens, off-season or on, keep working for your goals. Your dreams are not impossible and the only thing that will stop you from reaching them is your self-doubt. Anyone can do this activity so long as they continue to strive for excellence. Do you have any favorite road anecdotes? You can get a lot of these from marching for so long, but here's one of my favorites. After the Lynn, Mass., show in 2002, the mellos had a sectional dinner at Wendy's and our music tech, Pat Dougherty, came in after critique and said the brass judge called our section sound "impressive" and the improvements that the corps made from the early season were "inspirational." I have never been in an ensemble that was described with those words before. I felt incredibly proud and privileged to be a part of such an ensemble. The last good book I read: "Harry Potter and the Prisoner of Azkaban" The last great film I saw: "The Life Aquatic with Steve Zissou" Where I go to school and what I'm studying: Florida State University, civil engineering. Jobs I have/have had: I used to work for FSU Housing as night staff. It's an effective way to pay for tour! Three CDs I'd want on a deserted island: Janet Jackson's "The Velvet Rope"
Alanis Morissette's "So Called Chaos"
My "Cowboy Bebop" mix CD My favorite TV show: Every incarnation of "Star Trek" Favorite performers: There are too many, but Janet Jackson and Madonna particularly stand out. How do you "blow off steam?" Playing a good RPG always calms my nerves. What has been your formative drum corps moment? There is no formative "moment" in drum corps. Every day will change you. Best drum corps show ever: That I played: Crossmen 2001
That I listen to/watch: Star of Indiana 1991 What are you most looking forward to about the summer? I'm looking forward to aging out in what looks to be my best season yet, and playing Robert W. Smith's music one last time. Best thing about being in a drum corps: The people you meet. Worst thing about being in a drum corps: "Flying back-ups" During tour, the best part of the day is: The bus rides. You get to learn a lot about the people around you, and it's your time to cut loose. During tour, the worst part of the day is: The wakeup call. Favorite drum corps personality and why: There are so many, but Jason Bentley stands out. He always expected the best from you and he would never give up on you either. Everyday I learned something new and I got better. He also made everyday a fun one for us, no matter what was going wrong. What I want to be when I "grow up": I'm planning on being a professional civil engineer. Describe what you think a typical DCI show will look in 2015. Shows are getting more challenging with each season. In 2015, I believe every corps will be able to make you ask the question, "How did they do that?!" Feel free to add anything else you'd like. I just want to thank everyone who has touched me in my 10 years of being a musician. I can only hope that I have touched you as well.