April 23-29 marks National Volunteer Week. DCI.org takes a look this week at just a few of the many personalities that spend their time volunteering with drum corps. Contact any of the many drum corps out there to find out how you can become a volunteer. Name, hometown: Tim "Shorty" Bartholomew, Stroudsburg, Pa.

Which corps do you volunteer with, how did you get started and how long have you been at it? I began working with the Jersey Surf in the fall of 1994 as the brass caption head. At that time I had originally contracted to be paid a fee for my work. One day I was discussing the state of our contrabasses with corps director Bob Jacobs and informed him that they were of sub-standard quality and that we had to buy new ones if we wanted the students to succeed. He researched the cost of replacement instruments and it just so happened that it was the exact price of my instructional stipend. I could not allow the kids to play on those tin cans disguised as musical instruments. I have been volunteering ever since! I have thought from time to time that Bobby J. planned it that way all along! 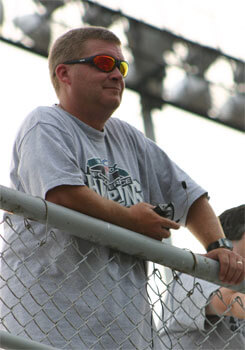 Tim Bartholomew
What kind of work do you do with the corps? My title is general manager which kind of means that I can stick my nose in wherever it appears that my nose needs to be stuck. If you asked the rest of the instructional staff they would probably say that it allows me to offer my opinion even when it was not requested! They are probably correct (some of the time). Actually, I do a little bit of everything. I am the facilitator for the design team. In some groups I might be called "program coordinator," but that would be a misnomer for the Surf since everyone on the design team has equal input to the process. I am simply the "tiebreaker." I also teach when I can, sometimes running a brass clinic or overseeing ensemble rehearsals. That is what I enjoy most, interacting with all the sections of the corps at the same time. Plus, rehearsing the ensemble gives me the best seat in the house to enjoy the entire performance many times each day.

What is your favorite part of being a volunteer? Having the opportunity to "play" with so many other dedicated individuals. ALL of the staff members at Jersey Surf are volunteers, so it is understood that everyone is participating as a result of a love of drum corps or, more fundamentally, a love of the students and of the organization.

What is the most difficult part of being a volunteer? Because everyone involved with the Surf is a volunteer it is actually easy to be one. I imagine it could be difficult for others in other groups to see some people being paid for their efforts while they themselves are donating their time. But, because everyone is in the same boat at the Surf, we just do not have that problem.

Do you have any favorite memories or anecdotes from your years as a volunteer? It has been such a process of growth at Surf that I really cannot pick an individual moment. Perhaps a few stats will put my favorite memories in perspective: When I joined the corps for the 1995 season we went on tour with about 75 members, two white school buses, a box truck, and Bob Jacobs' van (as our staff vehicle). For the 2005 season we went on tour with 126 members, four full-size motor coaches, a semi and a food vehicle. There are a lot of memories involved in getting to that point. What are you most looking forward to during the 2006 season? We will field our largest corps (135 members) and will have the most alumni working on the instructional staff that we have had to date. We are continuing to grow in so many ways. That is what is most exciting to me. Every year since the corps' inception in 1990, there has been measurable growth for the organization. I look forward to continuing that trend in 2006.

What advice do you have for those who would like to get involved as a volunteer with a corps? Everyone has something to offer! Just because you never marched or picked up a drum or spun a flag, does not mean that you cannot provide some valuable service. Go to the corps or other organization nearest you and ask what they need. You may be surprised what they offer you. (Jersey Surf is always looking for a few good drivers!)