Name, age, hometown: My name is Zachary Allen Smith. I'm 19 and I'm from Ferndale, Wash. What corps are you in and what is your role this summer? I am marching baritone with the Seattle Cascades for the fifth season. This coming season will be my second as the baritone section leader. 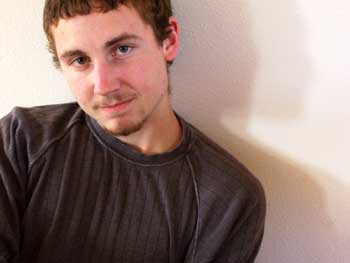 Zachary Allen Smith
Give us your full drum corps/marching music background. I began marching at Ferndale High School as a freshman in the 2000 - 2001 school year. I came into high school playing the saxophone. I heard about the Seattle Cascades through my band director who was actually the brass caption head there. He told us about some of his experiences and it sounded like a lot of fun, so I learned to play the trumpet and French horn because I had heard about a spot open with the Cascades. Unfortunately, by the time I was good enough, the spot was filled, but I continued to play the French horn. Then, when the summer of 2001 arrived, my band director called me, asking to fill a last-minute baritone hole. So I packed my bags and headed for what would end up being a life-altering experience. I've marched one season on second baritone and now fourth on lead. How did you decide to be a member of your corps? A large group of kids in my band were getting really pumped for tour, and our band director always encouraged me to try it since he was the brass caption head, so I got really interested in it. What first attracted you to the drum corps activity? We would always watch DCI videos in our band room and I was very impressed with the level of perfection the corps could achieve. What advice would you give to young people who want to march? GO FOR IT! It will get hard, but all it takes to get through the pain is to tell yourself you can do it. It is most definitely worth it. I can't think of any experience better than looking back on your rookie year and seeing how much it changed you. Do you have any favorite road anecdotes? Whenever someone gets in an argument on the bus, we settle it "Jerry Springer" style! It usually is just a game of chicken and a whole lot of screaming, but on the bus late at night. The last good book I read: I'm not really much of a reader, but I did read "Bread Givers" by Anna Yezierska for a history class. The last great film I saw: I'm also not much of a moviegoer. My most favorite tour movie, however, is definitely "Office Space." Where I go to school and what I'm studying: I'm currently a first-year sophomore at Western Washington University. I'm primarily majoring in music education, but if I happen to get a performance degree too, that's great. Jobs I have/have had: I currently am working part-time in a department store in our local mall. Gotta get tuition paid somehow. Three albums I'd want on a deserted island: This is such a hard question! Well, I'm a big Stan Kenton fan, so a mix of his best would be one, a CD of Eric Whitacre's best, and a Pat Metheny mix. My favorite TV show: It has to be the old "Who's Line is it Anyway?" By the way, Ryan Stiles lives about 15 minutes from my house. Favorite performers: Any and all music teachers. It takes a great performer to teach any performing art. How do you "blow off steam?" I don't really "blow" off steam. I like to "cool" off with some nice smooth chorale music. What has been your formative drum corps moment? In 2001, we had an absolutely amazing show in Greenville, Mich. It was an absolutely amazing feeling to know that we all put all of our emotions into that small, 10-minute show. We were all completely drained emotionally afterwards. It was the most amazing feeling ever. Best drum corps show ever: I'd have to say 1991 Star of Indiana. Amazing mello book and very well performed! What are you most looking forward to about the summer? Getting to know everyone, at least in the horn line, better. I love to hear everyone's individual stories. Best thing about being in a drum corps: Having the biggest family ever! Worst thing about being in a drum corps: Not getting to see everyone after finals. During tour, the best part of the day is: Whenever I'm on the field. The bus ride to the show is always fun too. Everyone getting ready to have the best show of the season. During tour, the worst part of the day is: Getting leg cramps on the bus. Also, when you wake up in the morning before everyone else and you think you have some time to just be still and silent for a while, then suddenly, CLICK! the lights turn on. Favorite drum corps personality and why: Kurt Jull. He has done and continues to do so much for the Cascades organization. I can't even begin to guess how many hours he puts into each wonderful season just for us members. Kurt Jull for president! What I want to be when I "grow up": I can't wait to be the director of my own high school band and inspire people just as I was inspired. Describe what you think a typical DCI show will look in 2015. Hopefully, about five times as many corps. Just like the old days. More opportunities at a lower cost. Feel free to add anything else you'd like. Contact me anytime at baritoneguy02@yahoo.com or on AIM with scadesbari04.