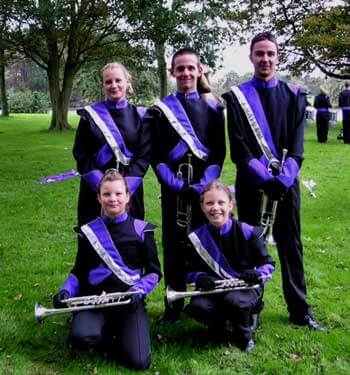 Anna Storey
submitted this one.

"This is a photo of the 2004 trumpet line from Distant Thunder Show Corps, who are based in Bedford, England. It was taken right before the Drum Corps Europe Championships in The Hague, Holland, on the Sepetember 25, 2004. This was the first time that they had competed in this competition and they were delighted to win 'A' Class. "Pictured are (back row from left) Aimee Smith, James Allen and Matt Sewell. In front are Josephine and Antonia Storey (my daughters). This was the first time that the corps had been into Europe to compete and they had a fantastic experience, to be repeated in 2005." Thanks Anna!
E-mail your Forzato submissions -- and we will get to them all, in time (and we're posting them in the order they were received) -- to dave@dci.org along with where and when the photo was taken. Send some biographical information about yourself as well. We'll give you full credit. Also, let us know if you want your e-mail address included.