From a Jubal press release:

In fact the Jubal Drum & Bugle Corps from Dordrecht, The Netherlands, Europe's oldest active drum and bugle corps (formed in 1911) has already landed at Chicago's O'Hare airport. Friday, July 21, the first 25 members and staff of the corps flew in and on Saturday the remaining group of 71 people arrived.

"On the occasion of our corps' 95th anniversary, we have scheduled a three-week tour through the United States. Jubal will be competing in Division II with DCI and will participate in the shows in St. Peters, July 26; Cookeville, July 28; Atlanta, July 29; Allentown, Aug. 4; and Michigan City, Aug. 6. We will then head to Madison for the DCI World Championships. During Championships week, Jubal will also feature its show at the exhibition event with Capital Sound, Madison Scouts and the Madison Scouts Alumni, which is scheduled at Masfield Stadium in Madison." 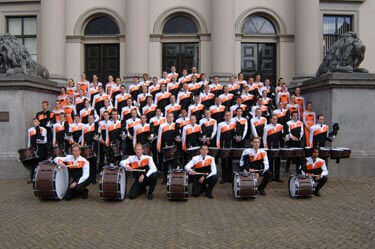 In addition to the competitive part of the tour, Jubal's members will also give a number of concerts. One of the highlights of the concert series will be the lunch-gig at Chicago's Navy Pier on Tuesday, July 25. Just like during the corps' 2002 U.S. tour, Jubal will again return to Michigan at the beginning of the trip, performing in the heart of the predominantly Dutch immigrants area of the country. Concerts in Michigan will be in Paw Paw (July 23 at 6:30 p.m.), Kalamazoo's Bronson Park at noon on July 24, and in Plainwell that same evening at 7:30 p.m. For those three concerts, Dutch Boy from Kitchener, Ontario, will join Jubal. Then on July 30, the corps will lead a parade at Six Flags Over Georgia amusement park near Atlanta.

"We're very pleased and excited to come back to the States this summer," said Jubal's Hans Kloppert. "It will be an experience of a lifetime for all of our members. This will be a trip that everyone will remember for the rest of their lives!"

"Free days are scheduled in Chicago, Atlanta, Washington DC and New York City. We shouldn't forget that these three weeks are the full summer vacation for quite a number of our members. Especially those with jobs," said assistant tour coordinator Cees Bogert.