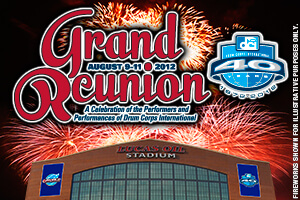 If you've ever performed, judged, volunteered or have been a part of the drum corps experience in any way, Drum Corps International invites you to join us in Indianapolis this August for the big party that's been 40 years in the making!

Marching Music's Major League will host the Grand Reunion, Aug. 9-11, as part of the 2012 DCI World Championships at Lucas Oil Stadium in Indianapolis.

"As we prepare to embark on our 40th anniversary summer tour, we've created a way for drum corps alums from around the world to reconnect and celebrate with us during our ultimate event," DCI Director of Events Susan Kuehnhold said. "More than 400 corps have participated in the World Championships since DCI's founding in 1972, and we estimate there are more than a quarter-million living drum corps alumni out there. It's going to be fantastic seeing so many people reunite in Indianapolis this August."

Hosted as part of the World Championship Semifinals and Finals on Friday, Aug. 10 and Saturday, Aug. 11, the Grand Reunion festivities will include opportunities for special recognition and interaction for participants including an on-field VIP ceremony honoring 40 years of DCI alumni, and an exclusive "after-party" on Friday night immediately following the Semifinals competition at Lucas Oil Stadium.

VIP Packages include deluxe accommodations at the Westin Indianapolis, DCI's official Grand Reunion Headquarters, along with hand-selected premium tickets to the World Championship Semifinals and Finals competitions. Also included are an embroidered souvenir polo shirt in a choice of favorite corps color, along with a limited edition lapel pin, special VIP credential and lanyard for field access during the special recognition ceremony, as well as a ticket to the exclusive Grand Reunion after-party. Additional packages and options also are available.

"There's hardly a day that goes by that I don't think back fondly to the incredible friendships and memories I forged in my own experiences as a drum corps performer in the 1980s with the Pride of Cincinnati and later with the administrative teams of Suncoast Sound and the Blue Knights," Kuehnhold said. "The Grand Reunion will be an incredible way for all of us to come together and rekindle and rediscover those friendships, relive memories and reconnect as a drum corps community. This event will be something for everyone to enjoy."