The following is a reprint of a midweek "Fanfare" column first run two years ago. Hey, it worked for the reprint of the guard column ran two weeks ago, so why not? Plus April is National Recycling Month. Well, maybe it isn't, but it should be. ONE of the months has got to be National Recycling Month, and since I haven't recycled any other columns this year, I'm due. Oh, about that guard column from two weeks ago. I received over a dozen e-mails expressing the following sentiment: "How could you even think about writing a column about the evolutions of guards in drum corps and not include ABC's guard?" To which I replied variations on, "If you would like to educate the readers on the innovations of your favorite guard, please send me something and I will run it in a future Fanfare column." To date, I've heard from one person. My offer remains. You can reach me at boomike@dci.org At the risk of sounding crotchety and older than dirt, when I marched in DCI (1975 through 1977 seasons), we had timpani (say that word to yourself a few times ... what a funny word ... sounds like it should be obscene) and bells and xylophones (marimbas and vibes were not allowed yet), and we wore them around our necks like God intended. Those of us in the activity who played these instruments were He-men and She-ras of extreme strength, Olympics-ready due to our training to carry these unnatural instruments for hours on end. We didn't realize how silly it was at the time to have five timpani; a corps needed five timpanists to carry the drums. Never mind that it was darned near impossible to find one timpanist with a great ear. Corps had to find four or five of them and hope they could stay in tune during the entire show. This was easier said than done, listening to early DCI recordings of timpani lines going increasingly into the "Twilight Zone" of pitch, where the concept of tuning went to die. That's why it was so captivating to hear an in-tune timpani do an actual solo feature, such as the 1974 offering by Anaheim Kingsmen of the timpani line playing the melody to Mike Oldfield's "Tubular Bells." (Check it out on the DCI Season Pass, or no one will ever love you.) Having a timpani in front of one's body was like carrying a sack of potatoes strapped to one's neck. Only women who had ever been pregnant could sympathize. 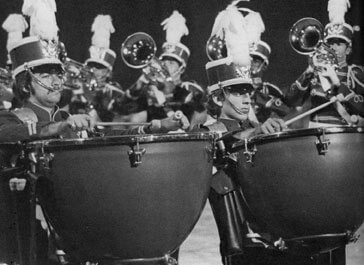 Polish Falcon Cadets with marching timpanis strapped on.
The timpani were cranked by hand. Corps timpanists spent as much time cranking as marching. Many of them gauged how far they should crank by the number of turns rather than the actual pitch, which led to the question why some corps had timpani. Well, mainly because the OTHER corps had timpani. Easy answer. The bells and xylophone were no joy at times, either. Strapped around one's neck, it was hard to move the arms from side-to-side. Corps mallet players in the early years of 1974 (the first year mallets were allowed) through 1976 learned how to play by moving just their wrists, an amazing feat. In 1976-1977, a t-brace was developed that allowed mallet players to get rid of the straps. Ah, total mobility. The only problem was that in getting rid of straps, we also got rid of the cross bracing across the back that distributed the weight so well. The t-brace conveniently transferred all the weight down the spine, pushing down from the shoulders. When the Cavaliers went to this system and switched from xylophone to marimba (now legal) in 1977, I think the effect of the weight on my shoulders could have been traced by me standing next to a doorjamb and having my decreasing height marked with a pencil. 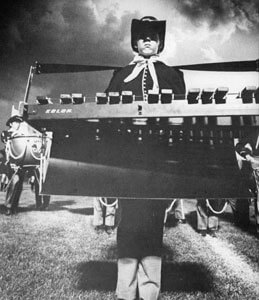 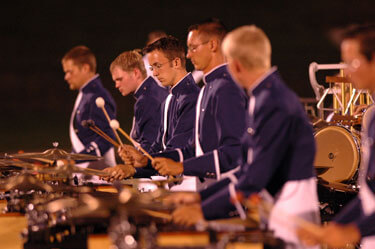 2005 Bluecoats amongst full front ensemble accoutrements.
After amplification was voted in, I asked a percussion arranger if the availability of amplification meant he could now get rid of some of the pit mallet instruments, as he wouldn't need so many for the volume. He looked at me as if I had proposed he cut off his parts of his own body. The message was clear: "I fought hard for these toys and the only way I'm letting go is when someone pries my cold, dead fingers off of them." In addition to mallet keyboards and timpani, we have any number of drums and a variety of color instruments. Ethnic instruments have become the rage the past few years, as "World Percussion" became part of our syntax. The maximum corps size was expanded from 128 to 135 primarily to accommodate the increased number of players in the pit. College music majors found they could join a front ensemble and not even know how to spell the word "rudiment." (I guess this also goes for some snare lines as well, but that's a different column.) Some ask, "Are these kids marchers? Can they say they 'march' in a corps?" I don't know. Although they don't "march" in the traditional sense, watch what they do. They're constantly moving from a keyboard to a pair of cymbals (no less than six different-sounding pairs in a pit will do) to a suspended cymbal (at least a dozen of those) to special sound effects (brake drums, triangles, gongs), back to the mallet instruments, and then to the ethnic drums and accessories. The kids of the front ensemble get a real workout, almost ballet-like in appearance due to having to contort their bodies to move from one spot to another without knocking into any of the instruments. Usually, the pit blends in and reinforces the show. But sometimes, it stands out and slaps fans across the face with either some incredible flurry of notes or some tender and tranquil effect that oozes beauty. The most incredible mallet feature I remember from recent years is Blue Devils' remarkable full mallet ensemble soli riff during "Methods of Madness" (2000). It was a mallet feature that never failed to generate enthusiastic applause, which is something rather rare, as pits are usually supporting characters and not the main actors. It's not that fans ignore the pit, but people do tend to look right through it to view the drill being staged on the field. Some pits may now look different to people because of the electronic amplification in use including mixing boards, cords and microphones. Who knows if synthesizers and electric basses are in the future? When I was carrying the xylophone or marimba around my neck, I couldn't imagine a day when a corps would share the field with more percussion instruments than found in a typical music conservatory. With that in mind, I guess anything can happen if the instructors and directors will it. 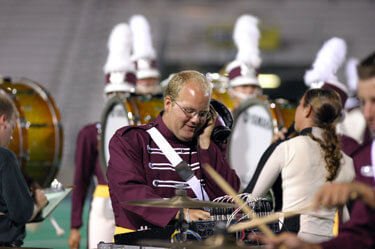 Electronics, the future of front ensembles?
The pit has allowed field percussion music to be much more musical than ever before. It has attracted more music majors to corps. It has challenged staffs to maximize space on their equipment trucks. It has become more a part of the field than an appendage. And, most important at this wee hour of the morning, it has allowed me to reflect on the dictionary definition of the word, at least the one that seems to make the most sense in concurrence with how we use the word: 15. an area filled with a particular material or substance Doesn't the dictionary glamorize everything?