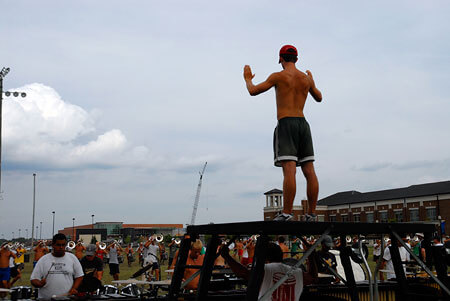 The Cavaliers work through new changes during an ensemble rehearsal block.
Audience reaction can also point out a show's weaknesses, even when the judges don't. "There are times when the judges might not be complaining," Farrell says, "but you were expecting a reaction and you didn't get it: It's time to go back and figure out why." Ultimately, each corps' brain trust must balance the equation between competitive success and artistic expression. "We certainly think about what place we end up in and what we can do to rank higher," Farrell says. "But we also want to do a program that conveys our version of drum corps, something that we can be excited about and that will play to our fans and our potential members." Read part I: The design meeting. Read part II: Divide and conquer.