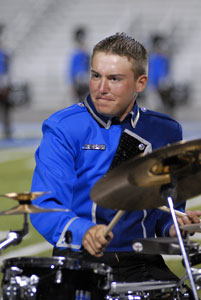 Nathaniel Hartman
Bluecoats front ensemble member and Ohio State student Nathaniel Hartman came on down at CBS's Television City in Los Angeles in an episode of the famed game show "The Price is Right" which aired on Oct. 16. Called down as the very first contestant, Hartman, who was a member of the Bluecoats from 2005-2007, also was the first to make it past the qualifying round joining Price is Right host Drew Carey on stage to play the game "Golden Road." "You'll see him up there wearing his 'pennies' on a necklace which is a Bluecoats tradition," said Bluecoats Executive Director David Glasgow. Coming away a winner of a big screen TV and kayaking equipment, Hartman also had a chance at winning a Yamaha piano and a blue, or for him a "Bloooo" Dodge Viper sports car. Check out the episode (#4041) from Oct. 16 on CBS.com. 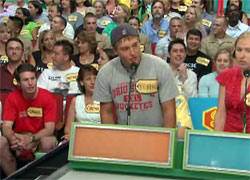