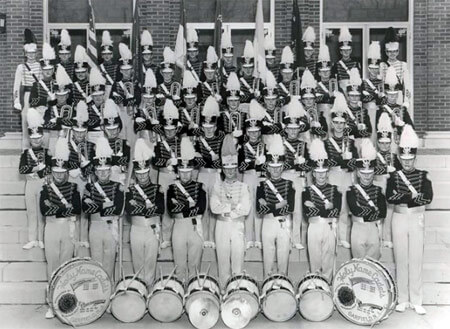 1957 Holy Name Cadets
While northern New Jersey had the formula for winning big, their neighbors up the line in Boston and its surrounding towns had the magic potion for making audiences go mad with excitement. The Most Precious Blood Crusaders and St. Kevin's Emerald Knights, in particular, never snatched the carousel's brass ring, but their performances over time made many think there was a grand conspiracy to thwart their war with the status quo. Their insanely inventive shows left the fraternity-at-large Kelly green and red-faced with envy. The underside of competitive church-sponsored corps was across the Hudson River in Brooklyn and Queens, with its neighborhoods and churches defined by genealogy. If you were Irish, Our Lady of Perpetual Help was your corps. If you were Italian, Our Lady of Mount Carmel, Our Lady of Loretto or St. Rocco's fit like a glove. The Swedes, Poles and Germans had their corps as well, but the St. Catherine of Sienna Queensmen and St. Rita's Brassmen did the others one better with racially and ethnically mixed corps long before it was the cool thing to do. Each of these pre-DCI groups made a run at the New Jersey heavyweights at one time or another with some—but not complete—success. Far from the maddening crowd, St. Joseph of Batavia (upstate New York) joined with these corps to have their place among the chosen. Many others had the briefest of moments in competitive sunshine, but for the powerhouse corps, they were mere gnats to be swatted away. The churches did extremely well with corps for girls only, with several such units gaining the competitive attention of the boys. Long Island's St. Ignatius gained national honors in the DCI era as a postscript to the peak period of church-sponsored corps. This article would not be complete without mentioning several very special units. The original "toughest" corps, from a neighborhood any normal family would want to leave in a heartbeat, was St. Joseph's of Newark. This corps gave us Father Finnigan (hard to believe, but tougher than his chargers) and Hy Dreitzer, the fountainhead brass arranger to all who followed in his wake, and last—but not least...undisputedly...no "in my honest opinion" here—the loudest horn line pound-for-pound that ever existed. Some corps left a permanent footprint behind long after they were gone. Many who witnessed their truly unique performances wish they could magically reappear once more. I'm talking about the St. Andrews Bridgemen, folks. It can safely be said that if you didn't love this corps, you had no joy in your soul. Finally, there is but another Newark corps, St. Lucy's. They went from perennial train wreck to contender over the course of one winter thanks to a young priest, Rev. Joseph Nativo. Father "Nat" types are few and far between these days but the tag of "World Changer" would be an understatement. This world of church-sponsored drum corps slowly faded as more times than not the priest who was the spiritual and financial core of the corps was transferred to another parish and the incoming cleric just "didn't get it." Or, in most cases, the growing reality that local church resources just couldn't handle the dollar demands that the emerging and more organized drum corps environment required. Many corps attempted to go forward independently, but few succeeded. Was it a better time for drum corps? Some will argue long into the night it was. But if the truth be told, the mission of the Church changed. New doors were opening for those willing and able to enter. Much like the church halls that are the repositories of our legacies, the richness of our inheritance is silent. It is a story that needs to be told.
Editorial assistance by Michael Boo. Fanfare archives