April 23-29 marks National Volunteer Week. DCI.org takes a look this week at just a few of the many personalities that spend their time volunteering with drum corps. Contact any of the many drum corps out there to find out how you can become a volunteer. Name, hometown: The Stoner Family, Milwaukee, Wis. Which corps do you volunteer with, how did you get started and how long have you been at it? The Stoner family has volunteered with the Madison Scouts since 2002 when our son Matt was a rookie. Martha and I helped on the cook crew the first year. Since then Martha and daughter Carolyn have worked on the cook and sewing crews. In 2003, I passed the test for my commercial drivers license and have driven each year thereafter. With a background in theatrical production, I also have helped rebuild and re-plumb the cook truck, helped rebuild the equipment truck three times in four years, and built props for the guard. 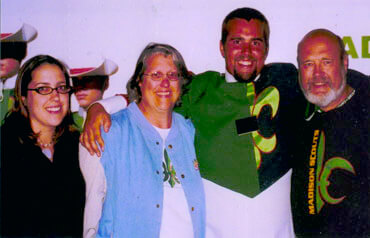