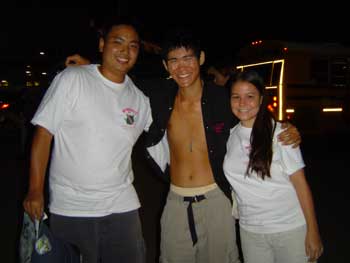 Victor sent in this one. "In this picture, I (Victor) am on the left and my girlfriend, Jen, is on the right. In the middle is my best friend, Taylor. He marched fourth bass in the Phantom Regiment. "This picture was taken at the Tour of Champions in San Diego. The story is that we visited him in Denver at finals, so he was very excited to see us there because he missed his family and friends dearly. Well, right after finals we tried to go home, but our plane was overbooked and they needed a few volunteers to give up their seats. So Jen and I embarked on a journey by giving up our seats and taking a reroute to California. "We showed up very early while all the corps members were eating pizza with each other -- and we surprised him. Boy, you should have seen the look on his face."

Thanks Victor!
E-mail your Forzato submissions -- and we will get to them all, in time (and we're posting them in the order they were received) -- to dave@dci.org along with where and when the photo was taken. Send some biographical information about yourself as well. We'll give you full credit. Also, let us know if you want your e-mail address included.