There is nothing like the thrill of the first performance of the season. If you don't know, I'm in my high school's marching band's color guard, and Friday was our first football game -- our first show of the year. I was very excited and ready to go for pregame. Then it started to rain. Well, that's OK, it didn't dampen my spirits, and a little rain never hurt anybody, so we moved onto the field for our pregame show. As we stood at attention in our opening set, it started to pour. But let me tell you, that didn't stop us, we performed very well and "projected" to the audience despite the downpour. We gave it our all. 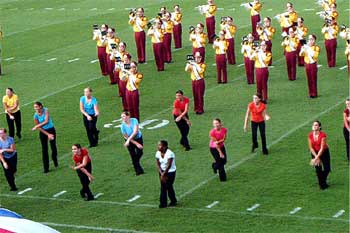 I had someone take a lot of pictures, and this is the only good one that came out. This is some of the guard dancing to "R-E-S-P-E-C-T" in our pregame "Motown" show. I'm the one in the red shirt on the front sideline in the lower left hand corner.
By the end of pregame, the rain was dripping off our drenched bodies, and then it started to let up. During first quarter, the rain stopped completely, so the guard went to our semi to change into our halftime show uniforms and begin warm ups. My goal this season is to make every show great and to perform to the best of my ability, in preparation for drum corps. So during warm up I began to prepare myself mentally for the show ahead of me. I knew what I would have to do to make this show incredible. After a guard pep talk, we joined the band on the sidelines to watch our opposing school's band perform. As I stood there, I saw a friend of mine on the tenor line who marched Spirit this past season. I watched him, just to see how his intensity level compared to the other two tenors, since he had marched a drum corps and the other two hadn't. When their show ended, Matt snapped back to attention while the other two weren't quite as quick and intense. It was easy for me to see how marching a drum corps last summer had enhanced his performance level. Seeing how focused he was pumped me up for our show. Now it was our turn to show everyone how hard we had worked. I'll admit it, I was a little nervous, as some are at a first performance, but I knew what I had to do. After quickly setting my flags and getting into place, I stood at attention with my head held high, and I just took a moment to look into the stands and scan the crowd. I was no longer nervous. I knew my drill, I knew my flag work, I knew how to make this show amazing, and I was going to do it. "Let's make it hot," said a person to my right. I grinned, realizing that we were ready. Our show kicked off and I concentrated on performing to the best of my ability. The show went very well, especially for a first performance, and the crowd loved it. As our final note was released, and I looked up at the screaming crowd, it was all worth it. All the hours of rehearsal and seemingly endless run-throughs paid off. I know it's hard to enjoy practicing, especially out in the heat, but when the marching season actually kicks off and you're performing on a regular basis, it suddenly becomes worth it. On a side note, I'm sure marching with a drum corps is the same way -- especially with everydays -- and I've heard from numerous people who have marched, that it's really worth it once you're actually "on tour." Hopefully I'll know from experience soon enough. After the halftime show, our band gets third quarter to walk around and get drinks and such. I was stopped by so many people who just wanted to tell me how great our show was, and how much they enjoyed it. That's another factor that makes all the rehearsing worth it, it makes me proud to be a part of such a wonderful group of people. When the game was over, I talked to my friend Matt for a few minutes. He and his friend, Tyler, tried to convince me to go audition at Spirit with them this fall. I laughed and said, "We'll see ..." Now, you may be thinking to yourself "Wait. Didn't she want to audition for Carolina Crown? Why didn't she just say that?" Well yes, I do want to march with Carolina Crown. But in the past week, a few things have come up that may make me unable to audition for Crown this year. Now, I'm not saying that I won't ever audition for Crown -- like my dream -- but I'm just not sure right now where I'll be auditioning this fall. And there is still plenty of time to make final plans for where I'll be auditioning. It may be Crown, it may be somewhere else, so keep checking back. Like I told Matt and Tyler, "We'll see ..." Allison Owen is a sophomore at Science Hill High School in Johnson City, Tenn., who plans to audition for a corps in November. "I'm in the SHHS guard and I like writing, dancing, performing, traveling, photography and having fun. As for after high school/college, I don't know what I want to do ... I just know I would like to do something dealing with color guard, computers or writing," Owen said.