Michael Gough marched as a soprano player in the Troopers from 2000 to 2002 and was the corps' drum major in 2003 and 2004. He is now the producer, director, editor and director of photography for "America's Core," (yes, that's spelled correctly), a new film being made about the Troopers. The reason for the spelling, according to Michael, is because "the students who are members of the corps are the core of America's values through the values taught at Troopers; honor, loyalty, dedication." Sound engineer Aaron Gregory, who was not previously exposed to drum corps, is assisting Michael. Both live in Boise, Idaho. Michael explains why he wanted to make the film and the logic behind the direction it's taking: 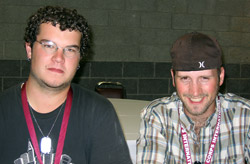 Michael Gough (right) with Aaron Gregory
The initial idea came back in 2005. I wanted to do a tour video for the corps, but things didn't work out. I was working for PBS and commercial companies such as ESPN. I wanted to take some of my talents in the video world and apply my knowledge to the corps. Other corps had done it, but we hadn't had anything like this since the famous "The Troopers Are Coming" film in the 1970s. In 2006 the corps went inactive. Like many alums, I was devastated, but we all had hopes the corps would re-emerge. Once we found out Fred Morris and other great names were involved in bringing the corps back, I started having a lot of faith in what was going to happen. I went to the November rehearsal camp with a camera to shoot footage and maybe go out on tour the last couple weeks to make a standard tour video. The corps had only 20 horn players at the November camp. I decided then that no matter what division the corps would compete in, I would do the video to help them out and to give them something they might be able to use for recruitment. Later, I started hearing about the corps possibly having 64 horn players and about the staff that was coming together. I knew then that this could be a big season. Therefore, it was time to think about doing something bigger. I was working for some large-scale documentary producers and was sent to New Orleans in January to work on a huge documentary on the effects of Hurricane Katrina, a work that was to benefit the arts in New Orleans. It was about Broadway Tony Award-winning actors and actresses who came in and worked with local children. From that, I began to put together a packet of ideas and info about what I wanted to do with the Troopers documentary. I started to think of all the things I could do with it: Who are the Troopers? What makes them so popular? Why have they been at the top and the bottom? During the Vietnam conflict, when America was in a dark era, the Troopers were doing so well. [Note: The corps won two national championships and was second at the 1973 DCI World Championship.] The corps was a moral leadership for many. When things got better in the country, the corps started to dwindle down, almost fading completely away. Then 9/11 happened, as did the war in Iraq, and now Troopers are again rising from the ashes. In 2004, people went crazy when we walked on the field before we even played a single note. It made me think, "Why? What's the psyche of the people? What makes them so excited about the Troopers now?" I overlaid American history and Troopers history and saw an interesting trend. I started putting a lot of that down on paper. I wrote up a press packet on what I wanted to do. We shopped it around. I needed a minimum of $20,000 to do what I wanted. The month of May came, and I was eating dinner with a country musician who was well known in the 1970s, Pinto Bennett and the Famous Motel Cowboys. I mentioned to him I wasn't getting anyone to bite on the documentary. He asked what I needed, I gave him a number and he gave me more than I asked for. I bought the equipment I needed, shipped it all to Casper, hired Aaron as the sound guy and headed off to Casper to get started. They were having a celebrity bingo night with important people. The corps was doing a camp in Cheyenne and we got our first segment there. We even got shots from a helicopter of scenic sites of Casper. We're following certain kids through the entire season, including rookies and those coming in from other corps. Some of those coming in from other corps are from bigger and higher placing corps, but they wanted to be in the Troopers. They bought in to what the Troopers are all about; their history and tradition. When I was marching, a few were passionate about the history of the corps, but many were marching to get experience to march somewhere else. The kids in it now are in it to be Troopers and to see the corps succeed. Former drum major Jim McIntyre told me that this is the first time he's seen the "real Troopers" in many years. He saw in the members the passion and desire to be Troopers. I now have enough tape for 180 hours of footage. The first cut of the video will be about five hours and the second cut about two. I'm editing along the way while the corps is on tour. We'll head back to Boise after the season is over, start editing and looking for the best stories among the monstrous amount of film we'll have. I'll then be shopping the video to a number of producers and film festivals. Any profit made from this documentary will go to the corps. I'm not making a cent off of it outside of what I'm paying myself to make it and cover bills. There's an interesting thing that has occurred while doing this project. I thought I knew everything there was to know about the Troopers. It turns out I didn't know half of it. I'm getting the perspective from around America about what the corps is about. It paints a picture of the Troopers' history, but also tells the story of America through the eyes of these young musical athletes. They're telling us about the corps, but the corps is making them respond—they're feeding off of each other. View a trailer of this documentary on TroopersDrumCorps.org.