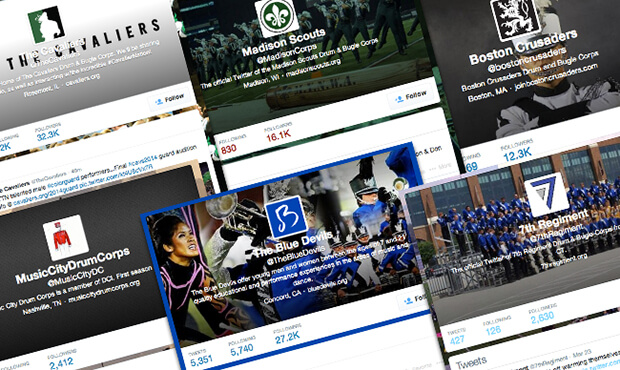 In March, Twitter celebrated its eighth anniversary by giving its more than 600 million users the ability to search for their very first Tweets ever published.

On July 21, 2008, at 5:39 p.m., DCI's first drum corps introduced itself on the popular social network, with nearly every World and Open Class corps following suit in the next few years.

As a record of their inaugural posts, check out this list of every corps' very first Tweet of all time, as we also crunch the numbers to see which groups are most active and garner the most attention on Twitter.

First corps to Tweet to the drum corps universe

First Tweets of DCI and its World and Open Class corps


Is looking for fans to be part of the studio audience for the Coundown. April 9th at Lucas Oil Stadium.— Drum Corps Int'l (@DCI) March 25, 2009

This is the official Twitter of the Blue Stars Drum & Bugle Corps— The Blue Stars (@TheBlueStars) February 27, 2009

Hello! We are in the process of gearing up our twitter site, we will start to "tweet" more often when the corps moves in in 22 days! Thanks!— Bluecoats (@Bluecoats) April 30, 2009

Getting ready for the audition camp this weekend!— Boston Crusaders (@bostoncrusaders) November 25, 2008

3 days until the 2009 Cadets April camp this weekend in NJ - last round of colorguard and brass auditions!!— The Cadets (@TheCadets) April 21, 2009

We're getting started here on Twitter! Come and introduce yourself!— The Cavaliers (@TheCavaliers) February 23, 2009

Hello, Tweeple! The Colts are here, getting ready for another whirlwind summer! Stop and say hello!— The Colts (@TheColts) February 24, 2009

It's drum corps time! Are you ready?!? We are less than a week out from our first camp! Follow us on Facebook: http://t.co/mNmp4425— ColumbiansDrumCorps (@ColumbiansCorps) November 21, 2012

I wonder who has the Twitter MADISONSCOUT and whether they'll give it to me.— Madison Scouts (@MadisonCorps) April 3, 2009

Save the date! Thanksgiving week-end - site to be announced.— MusicCityDrumCorps (@MusicCityDC) October 6, 2009

My Name is Nathan Martin. I'm a 3rd year mellophone player with Pioneer Drum and Bugle Corps and this is our twitter of the summer. Enjoy— Pioneer Corps (@pioneerdbc) May 27, 2010

Welcome to the official Twitter Page for the Racine Scouts Drum and Bugle Corps. Please be patient with us as we construct our page.— Racine Scouts (@RacineScoutsDBC) October 17, 2010

Thank you for following the official Raiders Drum and Bugle Corps twitter account. Be sure to keep checking back for updates— The Raiders (@raidersdbc) June 17, 2010

Not doing anything March 12-14? Come march with us! Spots available still in all sections.— Thunder Drum Corps (@ThunderDnBCorps) March 9, 2010

Welcome to the Official Twitter of the Troopers Drum & Bugle Corps from Casper, Wyoming! Follow us for news, pictures, and updates :)— Troopers Drum&Bu (@CasperTroopers) February 9, 2009