Each weekday before the DCI 2005 Classic Countdown, we'll be running first-person accounts of the seasons and the shows that will be featured in that event. Here's the fourth installment: By Jeremy Witherell My name is Jeremy Witherell and I was one of the drum majors for the 2000 Boston Crusaders. My first live drum corps experience was quarterfinals in 1994. I remember seeing videos playing in my high school band room prior to performances, but I had never seen a show live. Since I'm from East Lyme, Conn., only about two hours from Boston, Foxboro was easy for my family to get to, so it was the perfect time for my "introduction" to the activity. I was immediately wowed by the performances, even those of the smallest corps. I knew I had to be a part of this someday. 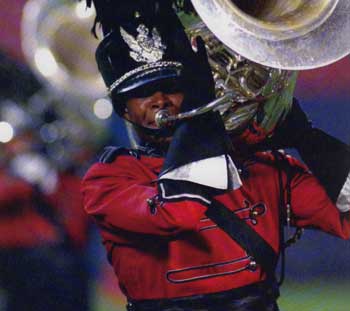