This week on DCI.org we'll be hearing from multiyear corps veterans, and why they stay at one corps for years on end. "Life is about creating something you're proud of and a lot of elements go into making that happen," says Ashley Studer, a six-year veteran with the Bluecoats who will serve as guard captain this summer. 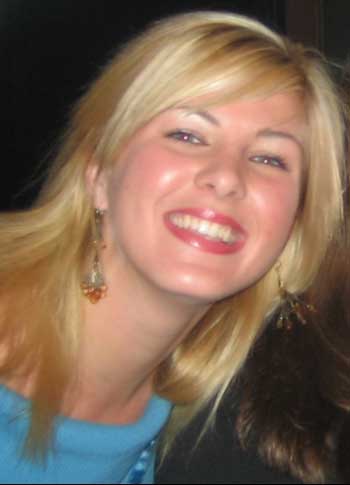 Ashley Studer
As a multiyear veteran, Studer has put some thought into applying the lessons she's learned in drum corps to life off the road, and she believes she's found the formula to success. "You have to give time, energy, and passion. You have to be willing to sacrifice and be willing to go through the bad for the good. You must approach everything you do with heart, intensity, poise, and most of all fierceness. You need to cross the line, push the boundaries, and be standard-setting. You have to give yourself fully to what you want to achieve. I think you learn how to do these things in drum corps and when you apply these to "real life" you will create something you're proud of," Studer says. For Studer, who plans to teach dance in public schools, life has a way of imitating drum corps, and vice versa. "I feel like everything I do is related. Pretty much every aspect of my life deals with the performing and visual arts. I think that marching drum corps has helped me become a better instructor for the color guards that I teach and I think it has helped me be prompt, organized and disciplined at school," says Studer, who is on staff with the Westerville, Iowa, winter guard. She'll start teaching color guard at Chippewa High School in Ohio this fall. Currently, Studer attends the University of Akron, where she's majoring in dance performance and minoring in Spanish. Beyond teaching, Studer has big plans. "After I finish college I would like to go to grad school and pursue my masters in choreography -- ya know, become the next Twyla Tharp." Capture and Escape Studer attended her first Bluecoat auditions in 2001 with the encouragement of her friend Mike See's father, who was a big Bluecoats fan. "Twenty minutes into the camp I was hooked and wanted nothing more than to become part of the corps. After many discussions between Mr. See and my mom, she decided to let me march and I've been addicted ever since," Studer said of that first taste of drum corps. "Mr. See was a wonderful person, and without him, drum corps may have never become part of my life. Sadly, Mr. See and his wife passed away but they are still very much apart of the spirit of the organization," Studer said of the man who convinced her to march.
Other personalities at the Bluecoats have helped convince Studer to stick around as well. "The staff at Bluecoats is definitely more than just "instructional staff" -- they are creators, motivators, inspirations and -- most importantly -- they are educators. They educate you on the activity and they educate you on life. They have taught me a lot, and I hope to be able to pass the information I have learned from them onto others," Studer said of the Bluecoats organization. Finally, Studer says the Bluecoats have become a kind of family to her, which has contributed to her marching longevity. "Bluecoats is my home away from home. They are my best friends, my family and a defining part of who I am. I've stayed at Bluecoats for six years for these reasons," Studer said. The Six seasons In each summer she's marched, Ashley Studer has learned new things while on the road with her corps. Here's a breakdown of what she's learned year by year. 2001: I learned how to be away from home, how to live with 135 strangers, how to sleep on a bus and a gym floor and how to fall in love with drum corps. 2002: I learned how to be a vet and help others with the problems I had when I was a rookie. I also learned how to eat, pack, load and get ready for a show in under 1.5 hours. 2003: I learned how to really push myself through various circumstances. And I also learned one of the most valuable pieces of information I have learned in guard: "Do one thing at a time, do it, and then move on." 2004: This year I definitely learned how to take things to the next level, and I also learned that change is sometimes necessary and can be for the good (with a new color guard staff). 2005: Again, I just learned how to take things up a notch, the importance of consistency, and that after five years of drum corps your body wants to punch you right in the face. 2006: I'm sure I'm going to learn many more valuable things, but for the sake of Steph Furniss, I am hoping that 2006 will be the year I learn how to get in the diagonal.
Although she's learned distinctive things each year, Ashley Studer says each summer with the Blucoats has been better than the previous. "The quality and caliber of the members and shows get better each summer. Each year at Bluecoats just keeps getting better. The 2005 program was fabulous and I am expecting great things from our 2006 show," Studer said. And although she admits it's hard to pin down one favorite drum corps moment, she did pick a recent one. "One moment that stands out is when I was chosen to be the guard captain. I had three fabulous predecessors (Alyssa Ann Erikson, Jenn Johnson and Aaron Brown), and the fact that someone thought I could even begin to fill their shoes meant a lot. Alyssa, Jenn, and Aaron are walking definitions of what it means to be a Bluecoat. They exemplify the essence of Bluecoats and I admire them a lot," Studer said.