Carolina Crown
July will no doubt be an epic month on the 2010 Drum Corps International Tour. With 64 events on the schedule, fans across the country will have the opportunity to see drum corps every single day of the week from July 1 all the way through the 31st. Coming up this weekend will be more Star Spangled excitement than even a stilt-walking Uncle Sam could shake a drum stick at. Beginning tonight, Friday, July 2, will be four events stretching all the way from the America's smallest state, Rhode Island, to the third largest, California. The Summer Music Preview in Bristol, R.I. will feature seven corps and mark the second matchup of the season between Carolina Crown and the Bluecoats who were separated by less than a point in their last meeting. Four days later, many of these corps will return for parades – Bristol is home to America's oldest Fourth of July Celebration, this year celebrating an impressive 225th anniversary. Back in the Midwest on Friday, the Rotary Music Festival marks the second DCI Tour event of the season in America's Dairyland, taking place at Cedarburg (Wis.) High School. Wisconsin's best including the Blue Stars, Madison Scouts, Pioneer and Racine Scouts will join the Cadets and Colts in this competition. 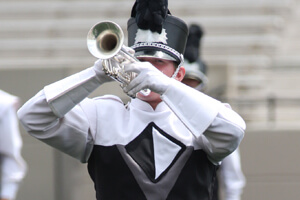 2008 Spokane Thunder
Two events out West will wrap up Friday's competitions. The majority of corps will compete in the San Diego area at Dick Haines Memorial Stadium for Corps at the Crest – Vista. The lineup of 10 corps will be dominated by Open Class groups and will include the inaugural DCI performance of City Sound. The Long Beach, Calif. corps earned its OC stripes this year to compete on the 2010 DCI Tour. Up north in Salem, Ore., the smokin' hot Drums of Fire event at Willamette University will mark the return of (Spokane) Thunder to the competitive field, while also featuring the Troopers, Blue Knights, Oregon Crusaders and Vanguard Cadets. Shouts of "FOUR MORE EVENTS!" might be heard coming from drum corps fans on Friday, as Saturday brings another quartet of contests to the DCI Tour schedule. On Fourth of July eve a gigantic lineup of 12 World, Open and All-Age Class corps will head to Mt. San Antonio College in Walnut, Calif. for Corps at the Crest. The Cascades will mark their first competition of the season with five other corps in the suburb of Hillsboro, Ore. for the Portland Summer Music Games. Also on Saturday, Michigan City, Ind., a city steeped in drum corps tradition, hosts nine corps for the 50th anniversary edition of the Pageant of Drums. This evening competition will give the Legends, Colt Cadets and Blue Saints a chance to feel out the playing surface as they get set to return to iconic Ames Field on Tuesday, Aug. 10 for the Open Class World Championship Quarterfinals. 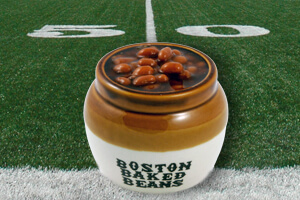 Replica of the Beanpot Invitational Champions Trophy
Rounding out Saturday's competition will be the longstanding Beanpot Invitational in Lynn, Mass. featuring eight World, Open and All-Age Class corps. Offering one of the most coveted of all pieces of drum corps trophy hardware, the winner of the Lynn event will take home an actual Boston Baked Beanpot. The chance for a drum major to devour the delectable treat from the container like hockey players drink champagne from the Stanley Cup will be at the discretion of the winning group! Numerous corps will be marching down "Main Street USA" in more than 60 parades across the country on the Fourth of July, while the Blue Devils, Santa Clara Vanguard, Academy, Mandarins and Pacific Crest return to the hallowed grounds of the 2007 DCI World Championships at Rose Bowl Stadium for a special exhibition performance. These five groups will highlight the 84th annual Americafest celebration, which draws thousands of Southern Californiaites to Pasadena for one of the largest fireworks displays in the state. Don't miss DCI.org's comprehensive list of "Corps on Parade!" detailing where and when you can see your favorite corps marching in rank and file formation on the Fourth. Monday, July 5, Riverside Community College hosts the Western Corps Connection with another huge lineup of 12 West Coast corps including last year's defending World Champion Blue Devils. The Pacific Northwestern swing of the DCI Tour heads to Tri Cities, Wash., for Drums Along the Columbia which offers a triple-treat of World and Open Class performances, and drum corps competition returns to Connecticut for the first time in nearly 10 years headlined by the Boston Crusaders at the Bridgeport Drums competition. 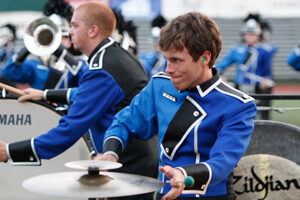 Bluecoats
A lone event in the state of Idaho takes place on Tuesday, July 6 for the Boise Summer Music Games. Featuring the same lineup of six corps that were previously touring Oregon and Washington, the Cascades will host a pre-event educational clinic for students beginning three and a half hours before the show. More than 2,000 miles away that day, the Youth Education in the Arts-sponsored Drum Corps – An American Tradition series continues in Chambersburg, Pa., with performances by seven East and Midwest corps. Additionally, the Blue Stars' River City Rhapsody returns from a two-year hiatus bringing eight corps to Metamora High School in the heart of Central Illinois. The Emerald City (that of Dublin, Ohio, not of the L. Frank Baum classic), hosts Artistry in Motion on Wednesday, July 7 at Dublin Coffman High School. Located only about two hours from their hometown of Canton, the Bluecoats will be hoping that there's also no place like home in Dublin, as they look to catch Carolina Crown and stay ahead of the surging Cavaliers who will also be a part of this event. Wednesday's Corps Encore in Ogden, Utah, brings the Santa Clara Vanguard and Blue Devils back to the tour with the Blue Knights and the Troopers along with the Cascades, Vanguard Cadets and Spokane Thunder, as these corps start to make their way east for upcoming DCI Tour events. The Three Rivers Summer Music Games in Pittsburg, Pa. on Thursday, July 8 will complete week three of the Drum Corps International Tour, pitting a lineup of World Class corps against each other including the Cavaliers, Boston Crusaders, Phantom Regiment, Madison Scouts, Spirit and Crossmen. Coming up next week: Is there really a Kalamazoo? Watching drum corps from a Mile High, more Golden State goodness, Tour events in Tornado Alley, and more!