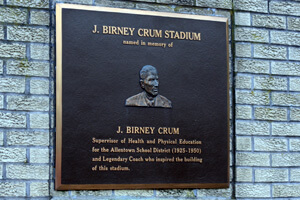 Iconic J. Birney Crum Stadium
Drum corps fans, the 2010 Drum Corps International Tour is here! Kicking things off today, June 18, the Cadets, Cavaliers and Carolina Crown will offer double the performance excitement with the 3 "C" Double-Play Season Opener at the revered J. Birney Crum Stadium in Allentown, Pa. With a special event format (profiled in this DCI.org article), the corps will each perform twice with a question and answer session in between so fans can gain an in-depth understanding of each show concept. The 3 "C" troupe will caravan 330 miles down the East Coast to Chesapeake, Va., for an encore performance on Saturday, June 19. Santa Clara Vanguard and the Blue Devils get things rolling on the West Coast with their Family Day Preview on Sunday, June 20. This exhibition event will also include an appearance by the all-age San Francisco Renegades. Back on the East Coast on Sunday, Teal Sound gets its first shot competing as a World Class corps, squaring up against six other corps at FirstBEAT, Carolina Crown's hometown show in Fort Mill, S.C. Phantom Regiment, Bluecoats and the Glassmen will all get a competition under their belts on Monday, June 21, at Drums Across the Tri-State in Charleston, W.V. They'll face a high-powered lineup of four other World Class groups including the Cadets, Carolina Crown, Spirit and Teal Sound. 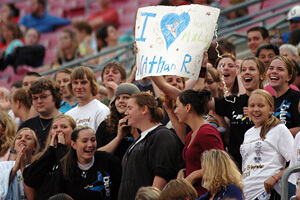 Fans have anxiously been awaiting DCI's return to Louisville.
Drum Corps International's first Premier Event of the season will take place on Tuesday, June 22 in a return to the University of Louisville's Papa John's Cardinal Stadium for the first time since 2008. DCI Louisville marks the Madison Scouts' 2010 debut. They'll be putting a timeless production of Richard Rogers' "Slaughter on Tenth Avenue" and Gershwin's "Rhapsody in Blue" to the test against the Bluecoats, Cavaliers, Phantom Regiment, Glassmen, Pioneer and Teal Sound. Also on Tuesday, the state of New Mexico will play host to its only tour event of the season with Drums Along the Sandies in Rio Rancho. Here the Blue Knights, Troopers, Academy and Open Class Revolution make their competitive debuts. Those same four corps will head to Mesa Ariz., the next day (Wednesday, June 23) for the Southwest Corps Connection I. The Glassmen will sponsor its annual hometown show, the All-Star Review on Thursday, June 24. Taking place just 25 minutes south of Toledo, the event will bring together the Bluecoats, Phantom Regiment, Crossmen, Pioneer and Teal Sound at Bowling Green State University's Doyt Perry Field. 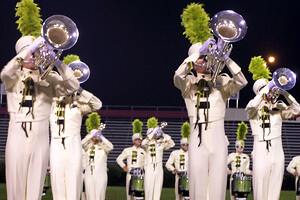 Carolina Crown impressed many with
a huge win in Normal, Ill. in 2009.
Illinois State University's Hancock Stadium in Normal is always one of the most electric audiences of the summer with the DCI Central Illinois Premier Event (Friday, June 25) serving as the culmination of a week of activities for hundreds of music students at the Music For All Summer Symposium. As the finale to the competitive event, marching band summer campers will have the opportunity to learn and perform a segment of the Carolina Crown's 2010 production "A Second Chance" with corps members. Heading up the start of weekend two in the West, the California corps will have their first official competition of the season on Friday, June 25, in Clovis, Calif. At the Mid-Cal Tour of Champions, the Blue Devils and Blue Devils B will start the defense of their '09 World Championship titles against Santa Clara Vanguard, Blue Knights, Troopers, Mandarins, Pacific Crest, Vanguard Cadets, Revolution and Blue Devils C. View the complete 2010 DCI Tour schedule.