Photo by: Facebook
Countless thousands of students dream about playing an instrument in a Drum Corps International ensemble. However, many of those may believe their chances are limited without years of prior brass or percussion performance.

The following musicians disprove that notion and want other woodwind players to know that they too can find a spot in a DCI drum corps. 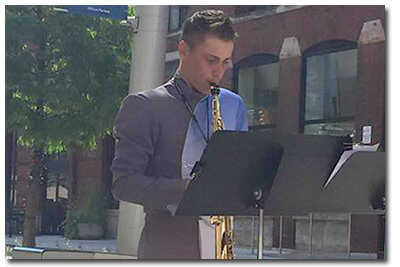 Austin Gaesser
A university saxophonist who taught himself how to play tuba in order to perform with the Blue Knights.

DCI.org: Why should woodwind players perform in a drum corps?
AG: Drum corps made my woodwind playing better. The breathing techniques I learned tied directly over to my saxophone playing, helping me to learn to listen and play with a better tone.

DCI.org: You’re a music education major. Has drum corps helped prepare you to be a better teacher?
AG: Learning the tuba will help me teach brass to my students. I learned a lot of dos and don’ts and various teaching techniques. None of that would have been possible had I not joined a drum corps.

DCI.org: Did you have tuba lessons before joining the Blue Knights?
AG: No, I taught myself tuba and had never before had any consistent training or lessons. I’d encourage any woodwind player to just pick up a brass instrument and start practicing. 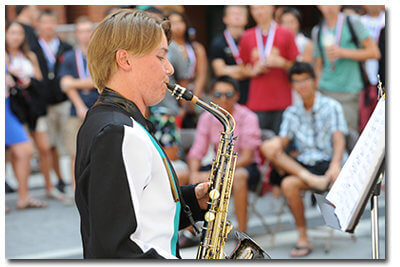 Savannah Terrell
A saxophonist who is a member of Pacific Crest. She picked up the French horn a month after seeing her first drum corps show in 2009.

DCI.org: How has learning a brass instrument for drum corps changed you?
ST: I might not have become a music major if I didn't have the French horn to open up so many doors for me. I was motivated to become a stronger musician and a better person.

DCI.org: How does playing brass in a drum corps make you stronger and better in life?
ST: It’s beneficial in that it makes one spend more time learning, more time practicing, and more time playing music. It shows people’s drive and desire to be more and makes them stand out.

DCI.org: What should woodwind players do to prepare for drum corps?
ST: They should get lessons; but if they can’t afford lessons, they should ask their band director for help, ask them to listen to their playing once in a while and ask them to give them music to work on outside of band. If people see that one is willing to work to get better, they're going to want to help you. 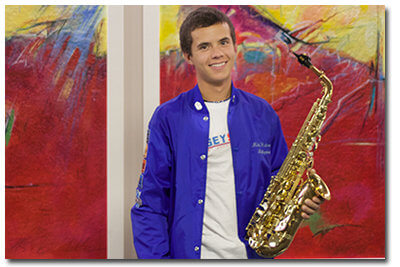 Michael Halcovage, Jr.
A saxophonist who since first auditioning for the Jersey Surf, has worked his way up through the ranks to be named the corps’ horn sergeant for 2016.

DCI.org: How did you start playing a brass instrument?
MH: As my senior year in high school started to wind down, I decided I would borrow a mellophone and teach myself to play it for college marching band. In the back of my mind I jokingly thought, “Hey, maybe one day I'll march drum corps!”

DCI.org: Why did you decide to audition for Jersey Surf?
MH: Being a college freshman was stressful. I thought drum corps might be something that could take me away from the stresses of everyday life. I got a Surf audition packet at the encouragement of a friend who was just off the 2013 tour and tackled the materials with everything I had.

DCI.org: What should woodwind players know about auditioning for drum corps?
MH: Their decision to work hard determines their eligibility. They shouldn’t count themselves out before giving themselves a chance. It doesn’t matter where they start; what matters is their commitment to improvement and achieving excellence. Showing the staff that you’re ready for the challenge is what will get you a contract. 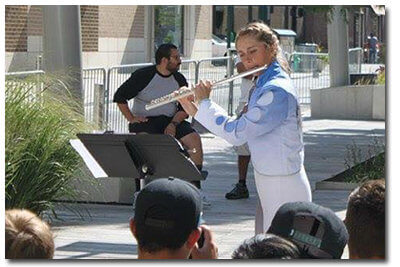 Mikala Mortensen
A university flutist who played tuba for the 2014 and 2015 Blue Knights. Mortensen took first place in flute at the DCI Performers Showcase during World Championships week in Indianapolis.

DCI.org: Did marching in a drum corps require you to sacrifice your time playing flute?
MM: I practiced tuba every day at school, but I still played the flute for two to three hours a day. I was able to do both because I really wanted to march Blue Knights. Even on tour, I was able to practice my flute for an hour or more almost every day. I woke up early, stayed up late, and used any free time I had for practice.

DCI.org: What should woodwind players do during the off-season?
MM: They should e-mail their instructors between rehearsal camps if they’re having problems with the music, and ask them during camp meal breaks for additional help. One’s marching peers are also good for advice. They shouldn’t leave their woodwind instrument at home when they go to camp; the extra practicing shows diligence.

DCI.org: What should woodwind players focus on to impress a corps’ staff?
MM: They should display the skills that they already have and demonstrate their musicianship, even if they’re still working on brass technique. When they return to the next camp, they should have everything prepared that the staff member asked them to do. If they show a great deal of improvement between each camp, they’ll be more likely to be asked to be a member of the corps. And, they should never use their late start with brass as an excuse. Once they make the corps, they should work even harder than they did for the audition. 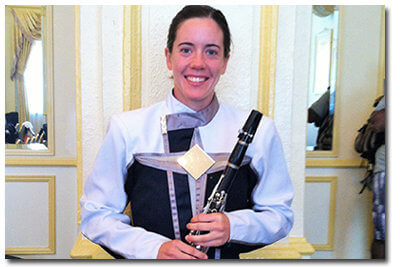 Sarah Devries
A clarinet and double reed player who learned trumpet to march with the Blue Stars. Devries is the 2015 DCI Performers Showcase clarinet champion.

DCI.org: What would you say is the most important thing to make the drum corps experience work for woodwind players?
SD: Approach the summer with a plan. Members should talk to their professors/private instructors about their decision to march a different instrument and ask what exercises they should work on to stay in shape during the summer.

DCI.org: How does the annual DCI Performers Showcase contest help woodwind players?
SD: Working toward the contest gives you the motivation to keep practicing your woodwind instrument during the summer.

DCI.org: What should woodwind players bring along during the summer?
SD: Last summer I brought my plastic clarinet I used in fifth grade. Bring copies of the woodwind music you’re working on; you don’t want originals damaged by rain and other drum corps elements. A humidity controlled reed case is practically necessary for a reed instrument. 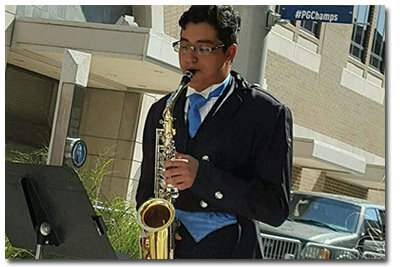 Ricky Espino
A saxophonist and music education major who plays trumpet for the Academy.

DCI.org: How did you start your drum corps career?
RE: The Cascades were housed at a school where my soccer team was practicing. I started talking with an instructor and learned a trumpet player had gone home due to an injury. I ended up meeting the horn line at the Minneapolis DCI show, was put on the field in San Antonio, and was playing the entire show by Allentown.

DCI.org: How did you end up with the Academy?
RE: I saw on Facebook that they needed to fill a trumpet spot for the 2014 season. I told the director my brass experience was limited, and I sent in a video of my marching. I was invited to the move-in camp as an alternate. After marching all weekend and demonstrating lip slurs, I earned a spot for the summer.

DCI.org: What did you do to stay atop both your saxophone and trumpet playing?
RE: I sent in videos every month during tour because I was going to be absent from band camps, and I practiced to participate in the DCI Performers Showcase. As for trumpet, our brass book required a lot of double-tonguing and it was clear that any weak link would break the horn line. I made sure it wouldn’t be me. All the hours practicing were well worth it. 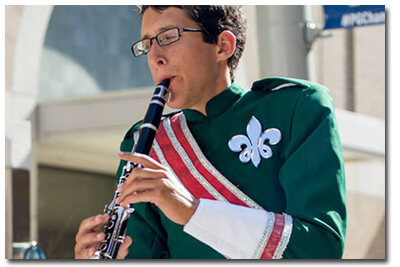 Zach Farley
Plays clarinet and double reeds and is a member of the Madison Scouts’ front ensemble section.

DCI.org: How did you end up in a front ensemble?
ZF: In the fall of 2013, the Cadets started an indoor percussion program in my area. I was encouraged to try out for the synthesizer position because I’ve played piano from a young age. I got a spot and two years later, I'm now the synth player for one of the top indoor percussion ensembles in the world.

DCI.org: How did that lead you to drum corps?
ZF: I saw that Madison Scouts were looking for a synth player back in April, so I made an impulsive decision to drive 10 hours to rehearsal camp to audition. For the entire weekend I was still nervous about auditioning for a drum corps, but I ended up getting the spot and started spring training only a month later! 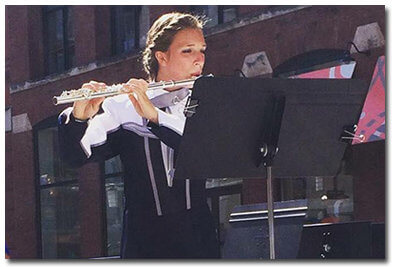 Callan Monroe
A flutist who served as a rehearsal assistant with the Blue Stars.

DCI.org: How did you end up in your position?
CM: I didn’t want to play a brass instrument because I feared I might lose my flute embouchure. A rehearsal assistant position opened up, and I took the opportunity.

DCI.org: What did you do as a rehearsal assistant?
CM: I ran the metronome during rehearsals and assisted with contest logistics. This allowed me to be a crucial part of the organization and to soak up all the information presented by the staff.

DCI.org: How did being a woodwind player fit in with your schedule?
CM: Practice sessions on my flute could only happen in the morning prior to rehearsals, during meals, and during packing times. I was forced to learn time management and how to plan for my practice time in order to be efficient. I would recommend my experience to anyone. You don’t have to be in a performing position to enjoy being in a drum corps. 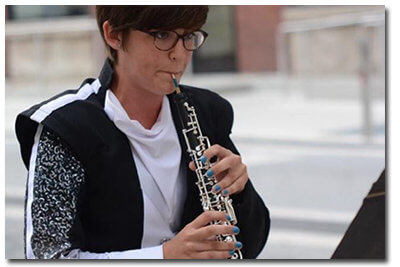 Alana Stevenson
An oboist who has been a Blue Devils drum major for the past three years.

DCI.org: Why did you sign up for the DCI Performers Showcase event during Championships Week and how did you keep up your oboe chops?
AS: I first did it in 2014 as a promise to my oboe teacher. When he asked me what I was going to be doing during the summer, he wasn’t expecting me to say I’d be marching with the Blue Devils. After assuring him I wouldn’t be playing an instrument that might interfere with my oboe embouchure, we figured out a plan to make sure I would improve on oboe over the summer.

DCI.org: How did performing in the Performers Showcase benefit you?
AS: I used it as a goal to keep me on track to practice my oboe. I found out I could practice during dinner breaks and loading, and if I woke up early, I could make new reeds. Twenty minutes here or there throughout the day helped me get better throughout the course of the summer. The Performers Showcase event is a wonderful way to kick off Championships Week, watching talented musicians from other corps playing on instruments we haven’t seen them on all summer.

DCI.org: What would you want other woodwind players to know about marching in a DCI corps?
AS:  If you are a woodwind player and you want to march, then just go for it! I am of the opinion that I can march only until I am 21, but I have a lifetime to continue my studies in the oboe.