By Allison Owen It's funny how things work out. I've been thinking a lot since I got home from tour. I haven't been thinking about anything in particular, I've just thought a lot about everything. I looked back at some of my first articles the other day. Wow, I've changed a lot. Now I'm a senior trying to decide where I should go to college and what I should major in. I'm trying to decide what to do about the rest of my drum corps career as well. It feels like just yesterday when I was trying to decide whether I should try out for color guard or not. 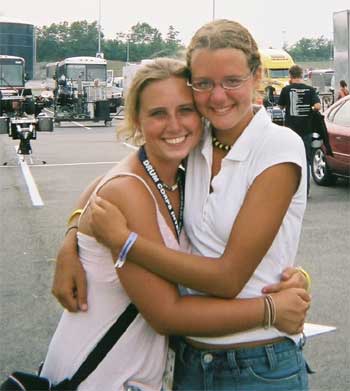 Allison Owen (left) and her seat partner, Nicole.
Back in the seventh and eighth grade I played clarinet. It never dawned on me to try something else. I never really thought about it, but I guess I intended on playing my clarinet in marching band. Wow. At this point, that thought gives me chills. My guard director pretty much talked me into auditioning. I didn't really want to, and I think I only did it so she would leave me alone and stop nagging me about it. Somehow I made it. I have no earthly idea how ANYONE in his or her right mind thought that I should be in color guard, but I made it. At first I didn't like it because I was terribly uncoordinated and therefore frustrated with myself. I can't put it into words, but I was pretty bad. I'm sure I wasn't as awful as I think, but I do know that I was far from good. Most of the other new girls had done dance and what not before, so they were used to putting things together and understanding work. I had a really difficult time piecing segments together and I would get so frustrated that I would end up in tears. I knew I could do it, it just took me longer than most of the others. I don't quite remember when it was, but one day something clicked with the whole "color guard" thing and me. From that point on I was one of the "stronger" members and the only one to participate in an activity outside the school. Now I put things together with ease and remember the little details that I used to overlook. So color guard was always something that I enjoyed once I got the hang of it, but I wasn't sure how much I loved it. Obviously to get out there and do it every day, all day for an entire summer, I had to like it some, but I had no idea until this year. Deciding to take a summer off from color guard to check on my knee completely changed my perspective. I know now that my knee is OK and just needed a break, but most importantly I know more than ever that I love being on that field. There is something amazing in the art of performing that I can't explain, but I know I want it. I know I have to get back out there. I don't know where or how or when, but I'm getting back out on the field. I know I'm being extremely vague, but all will be revealed in due time. I look at where I am now and I'm literally scared to death to think of what would have happened had I stuck with the clarinet and not tried guard. I shudder to think that I would probably not know about this amazing activity -- at least not from a member's perspective -- and I would not have found the one thing that has come to be my life. I wouldn't be having these crazy thoughts and writing about them, because they wouldn't exist. And had I marched guard this summer, I might have messed up my knee forever. There's no way of knowing for sure, but one seemingly "small" decision can change everything. So now here I am in my last year of high school faced with more decisions. If you know me, you know that I don't particularly enjoy making decisions. However, I do know that I need to make them. Not only do I have to decide where to continue my education and in what to major, but the next five years of my drum corps experience are up in the air as well. I've learned from my past that any decision can change the rest of my life, so I'm not taking any of them lightly. Since I feel that these decisions are pretty important, I've given them a lot of thought in the past month or so. I'm still not 100 percent certain on any of them, but I'm making progress. I don't know where I'm marching next summer or where I'll be next fall, but I do know that it will all work out in the end. No matter what I do, as I look back on it when I'm older I know I'll wonder, "What would have happened if?" But I also know that no matter what I decide, it will work out and I'll be OK with it. Allison Owen, 17, is a junior at Sullivan Central HS in Blountville, Tenn. She was assistant conductor for Southwind and enjoys dancing, writing, English, color guard, having fun and performing. She is currently undecided on college and a major.