Each weekday before the DCI 2005 Classic Countdown, we'll be running first-person accounts of the seasons and the shows that will be featured in that event. Here's the sixth installment: By Chuck Helbush What was it like with the Blue Devils in 1976? What individual insight can be given by one who was there? It really was a joy to be part of this corps. Blue Devils were on the rise and they were rising fast. To give just a snapshot history (for those who haven't heard), the Blue Devils were newbies. Granted, the organization had been around since the late '50s, but Jerry Seawright had the vision to take a drum and bell corps (that's right, glockenspiels) where the grand finale was the state championships and give them horns. Word has it he did this with his own money even before the Blue Devil Board had given approval. This shows how much Uncle Jerry thought of this group. This happened in 1970. Yes, Uncle Jerry did get reimbursed (I believe). 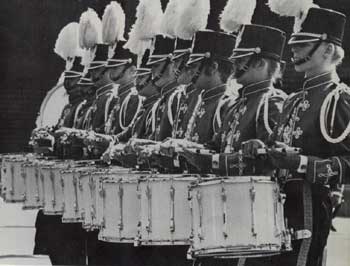 The Blue Devils in 1976.
This same group ventured out to DCI by 1973, in only their fourth year with horns. By not making finals in 1972 and 1973, the Blue Devils missed having the opportunity to brag about making every single World Championship finals in DCI history. Now I can't speak more about that '70 to '73 era, as that was before even this dinosaur's time. I joined the corps in the fall of '73, and I had no clue what drum corps was. I never watched a show until '78, so I was in the show long before I enjoyed the show. The big accomplishment for 1973 was to make associate membership (the top 25), as the Blue Devils squeaked in at number 24. Considering the number of corps that existed at the time, that was quite an accomplishment for a local corps (weren't we all). All members were from a reasonable commute distance away. Nobody in the ranks had marched with another DCI-caliber corps (to the best of my knowledge). 1974: The farthest that anyone came to march with this corps was the Napa Valley (about an hour's drive). We were also blessed with the brother-sister duo of Jim and Bonnie Ott, who came from Stockton (also about an hour away). Those folks were the only individuals in the corps who needed more than a half hour to make rehearsals. Compare that to the folks in corps today. I said Blue Devils were rising fast, and we held true to form. We got ninth place this year. This corps is where jazz was first attempted, with Chuck Mangione's "Legend of the One-Eyed Sailor." The Blue Devils did not yet even have their own unique identity at this point. We were still very much the newbies. 1975: Imagine our surprise at one of the first, if not the first, show of the year, in San Bruno, Calif. Santa Clara Vanguard were the two-time defending DCI champions. First show out of the block and the Blue Devils take top honors. Imagine being a member of this corps standing at retreat during the placements. Expanding pride caused coat sizes to grow by two sizes or more. We were contenders. This was not to be our year, not yet anyway, as the Madison Scouts had not announced themselves yet. At least not to us. There would be several more times throughout the summer that we would beat Santa Clara, but we would never be better than Madison. Pride? A great deal that year. Humility? A healthy dose of that too. We seemed to have found our niche. Jazz was now our mouthpiece. We had begun to define our identity. 1976: As much as I would like to look back on this year, and tell stories of it being a cakewalk, such was not the case. This corps was driven. There seemed to be a universal focus and attitude that kept this corps centered. We had an extremely high retention of members from the previous years. Those few that we had lost were replaced by very capable people. We even picked up a few members from other corps. What turnover we did have actually increased our talent pool year to year. Go figure. We lost some great talent for a variety of reasons, but we did not have vacuums because of it. This corps knew the joy of the previous year, of what was accomplished, yet held the humility that kept us honest to ourselves. There was never an attitude that needed to be corrected from the corps. Sure, there may have been individuals needing a pick-me-up, but the general feeling was to keep on track. I can't remember the instructors ever needing to redirect the entire ensemble. We had enough experience to know what was needed. A hype phrase came out of this season. We would encourage ourselves to beat ourselves, to best our own score. We believed that if we could do better than the last performance, other corps would be hard pressed to catch us. I guess it worked. We won every show that year except a prelim of DCI West or a similar show in Boise, Idaho, when half the corps had the flu. Even with the flu, we came back at finals. At least a third of the corps could not stand for retreat. We ended up victors at DCI finals, sweeping all captions. Color guard was not a major caption way back when, and we may have lost that to 27th. Somebody needs to check this for me. Everybody pulled his or her weight that year. This was definitely a year to remember. It is one I always look back on with pride. It was not just because of the victories, but this was when the Blue Devils began their legacy. The formative years up to 1976 were a special time to be a Blue Devil. Other corps all had defined their images. Santa Clara, 27th, and Madison all had distinct auras about them. The Blue Devils pretty much solidified theirs during this year. Others (Michael Boo?) have said what the Blue Devils of 1976 did to the drum corps activity, and I will leave that to those others. I will be happy just explaining briefly the attitude within this corps that got us there. Take some talent, and mix it with the likes of Jerry Seawright, Rick Odello, Jim Ott, Wayne Downey, Mike Moxley and Mel Stratton, and you have a potent mixture. It was quite a ride. I am glad I was there. -- Trooper (That's my nickname, but I marched only with Blue Devils) Blue Devils baritone '74-'77
DCI Champions '76-'77
Co-section lead '76-'77