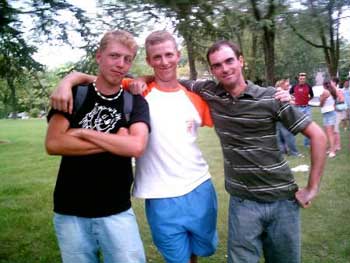 Coen Theuwis sent in this one.

"This is a pic of me, Coen (left), Peter and Menno. This past summer we marched with the Capital Regiment. This picture was taken on the 4th of July, after a parade. We had the day off.

"Friends in the corps called us "The Crazy Dutch guys" (we are from the Nethelands). Crazy? Yes -- crazy about drum corps! But this summer we became the "The Three Amigos."

E-mail your Forzato submissions -- and we will get to them all, in time (and we're posting them in the order they were received) -- to dave@dci.org along with where and when the photo was taken. Send some biographical information about yourself as well. We'll give you full credit. Also, let us know if you want your e-mail address included.