From a Blue Stars press release: The Blue Stars are pleased to announce that Rachel Traczyk will serve as their drum major for the 2005 season. 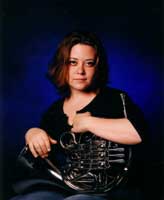 Rachel Traczyk
Traczyk is a veteran of the corps and is currently a second-year music education student at the University of Minnesota in the Twin Cities. Her experience as a performer ranges from competing in WGI as a member of the Champlin Park Winterguard to performing in a wide-variety of the instrumental ensembles at the U of M. "We are fortunate to have someone with the knowledge and experience that Rachel possesses leading our corps both on and off the podium this summer," said brass caption head Chad Armbruster. "She is a unique musician and has had a variety of experience both as a performer and as an instructor in many different settings." In addition to performing, Traczyk is in her third year of instructing the Champlin Park marching ensembles, serving as both a visual and music technician. "I want to make an impact on everyone involved with the Blue Stars, and help maintain and foster a culture within the corps of hard work, success, tradition and family. I want to be sure that we -- as a corps -- remember why we are here," said Traczyk.