Bob Somers, a 2006 member of Blue Devils B, sent this picture. 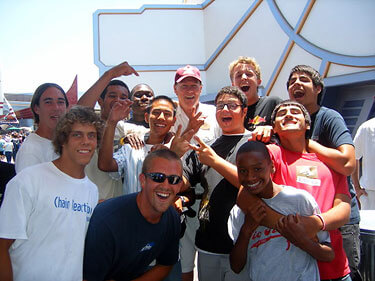 Blue Devils B had a day off this summer in sunny Southern California at Disneyland. After getting off of a ride, we were greeted at the exit by the Trashcan Trio, a performing group that does drum routines with garbage cans and janitorial supplies.

After they finished, some of the drum line members went up to talk to the guys. They explained that we were from Blue Devils B and asked if any of them had marched in a drum corps.

"Yeah, I taught a few corps. I know who you guys are. Do you know who I am?" one of the performers said.

Jokingly, one of the drummers said, "You're Tom!" That's what it said so on his name badge.

Excitement erupted as everyone made the connection to Tom who is a member of the DCI Hall of Fame.