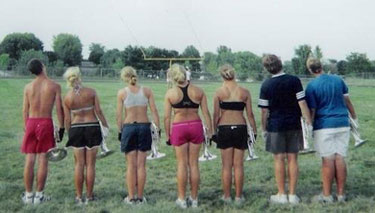 This picture was taken in somewhere in Nebraska. The goalpost is, as you can see, slightly askew. We thought it would be an appropriate section photo, as we were a very close group of people who kind of thrived on making everyone look at us weird. Case and point six of the seven of us can speak German, we officially gave grey hairs to the brass staff, and we could collectively outwit an electronic tuner!

I'll miss those guys a lot.