If you had to choose a song to represent this past weekend's Magic of Orlando camp, it would have to be "Everything In Its Right Place," by Radiohead. You could represent every drum corps out there with this song. It is synonymous with perfection. Each corps tries to place everything they do, in its right place, from drill, to music, to movement, and even how things are run on a daily basis. 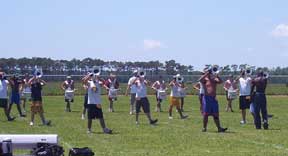 The Magic of Orlando rehearses this past weekend.
On Saturday morning, while the horn line and drum line were off learning the first chunk of drill, members of the front ensemble tried putting everything in its right place. While this involved no sticks, mallets, or cymbals, it was a very crucial job. It's not a very beloved job by front ensembles in the drum corps world, but it has to be done sooner or later. What I'm talking about is cleaning and organizing the equipment truck. Organization of a truck can sometimes be breathtaking just to watch. If one item is in the wrong place, it has potential to throw off everything and cause certain things not to fit. "Truck acrobatics" are also a very useful when it comes to loading the truck. Hanging from the ceiling, jumping from shelf to shelf, scaling walls, crawling through small passages are just some of the acrobatics front ensemble members are required to undertake when organizing and equipment truck. I had to use some of my truck acrobatic skills Saturday morning after getting trapped behind a couple keyboards, luckily no equipment was harmed in this attempt. Unfortunately, we didn't make everything fit in its right place this weekend, but we've got a pretty good grasp on what to fix to make it happen. The color guard was welcomed back this weekend as well, to begin working on the show. Guard caption head Dean Broadbent and his staff began teaching parts of the show and started sorting out the flag, rifle and saber lines. It's great having the entire corps in attendance finally, except the only downfall is longer food lines for every meal. The main goal of the weekend was to get the entire opener on the field with music. I was amazed to see the corps running around at 180 bpm and playing as well after only one day. Things are just starting to look better and better each day. The new show theme, "Silver Voices," was also explained a little bit more in detail to the members over the weekend. Only one more camp left till move in, and things are going as planned. Soon everything will be in its right place down in Orlando, Fla. Scherzo archives Fox, 19, is a sophomore at Florida State University. He played in the front ensemble of the Tampa Bay Thunder 2000 and 2001, and with the Phantom Regiment 2002, and will play with the Magic of Orlando in 2003. Fox will report back from each spring camp, and continue his reports through the summer. Send him e-mail at friceox@aol.com, or instant message him at friceox.