Each weekday before the DCI 2005 Classic Countdown, we'll be running first-person accounts of the seasons and the shows that will be featured in that event. Here's the seventh installment: While I spent four years with the Cavaliers, I think that drum corps is an absolutely silly activity when you stop and really give it some thought. It's one that I've been known to group up in a category with show choirs, lawn darts, Dance Dance Revolution and Jell-O wrestling. Because of this, I'm not the type of person who can watch hours upon hours of drum corps DVDs or roll my car windows down with the best of the 1980s blasting. Anyway, I don't think my four-speaker Toyota sound system could handle those powerhouse horn lines, and could you imagine the mess left on the sidewalk when a random pedestrian walked by my car only to have his face ripped off? 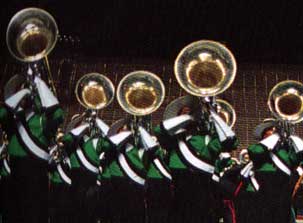 The Cavaliers contra line in 2002.
Despite all of this, the 2002 Cavaliers "Frameworks" show is one that I admit I consistently watch. If I'm in the mood for what people like to call a "drum corps fix," or if a new friend or coworker wants to know what drum corps is all about, the 2002 Cavaliers DVD is the one I would be keeping out of the case in a five-disk changer if I had one. I suppose the conflict of interest I face is that if I can't handle large doses of drum corps, how could I possibly sit through repeated viewings of this particular show? It would be easy to classify it as a third straight DCI title, a record high score with numerous caption awards, an undefeated season and guard uniforms that looked like something Cesario ripped off of the back lot of the 1982 sci-fi classic "Tron." All of those, however, come secondary to me. To tell the truth, I couldn't even tell you that record score from 2002 much less our finals score for any of the years I marched. I'm oblivious to them all, even the one that put us behind the Blue Devils when I had to give the second place salute as drum major in 2003. Ninety-nine point something or other is what I like to tell people we earned in 2002. I feel like I don't need those scores to reaffirm my interest in the activity. Probably a lot of people who go through the drum corps experience will agree that the season doesn't end up about scores, placements and the closest competition, rather the stupid things that happened with your buddies along the way. Things like the number of times you successfully plunged a backed-up school toilet, the Broadway shadow puppet show you co-wrote and produced on the gym wall after lights out with your flashlight, or the conversation you had on the bus about friends, family, religion, politics or a combination of them all.