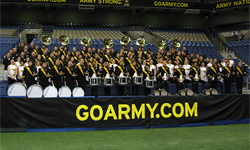 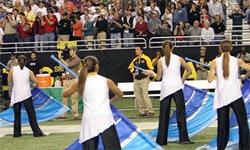 '08 U.S. Army All-American Marching Band
This group of standout color guard leaders will begin rehearsals on Dec. 29 as they "move-in" for the week to prepare for the halftime performance on Jan. 3. As part of the experience, all expenses are paid for members of the band and color guard, including transportation, hotel, food and activities. Equipment, rehearsal and reception attire as well as uniforms are provided by the partners of the U.S. Army; SportsLink, MENC, Jupiter Instruments, Inc., and DeMoulin Bros. and Co., among others. Color guard members will be instructed by staff members Tim Newburn and Ronnie Bynum. Newburn is the color guard director for the Langham Creek and Cypress Ranch High Schools in Houston, Texas, and recently joined the staff of the Blue Knights after tenures with the Glassmen, Bluecoats and Phantom Regiment. Bynum, who is a staff member with the Center Grove High School Marching Band, from Greenwood, Ind., serves as color guard caption head for the Cavaliers. This year's game will be broadcast live on NBC beginning at 1 p.m. Eastern time on Jan. 3. Last year – the inaugural year for the U.S. Army All-American Marching Band – the All-American Bowl set its own attendance record, with 36,534 fans in attendance. For more information on the U.S. Army All-American Marching Band, the U.S. Army All-American Bowl and its related events, visit USArmyAllAmericanBowl.com, MENC.org and GoArmy.com.