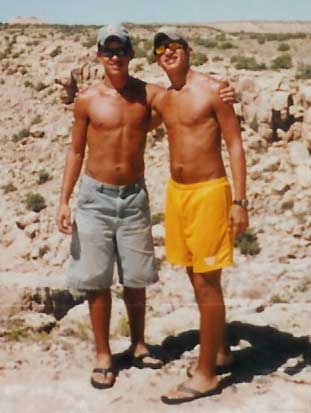 Adam Chitta sent in this one. "Hello! My name is Adam Chitta and this is a picture of me, on the left, and my twin brother, Stephen, on the right, the day after finals on our way to Utah for the rehearsal for the Tour of Champions show. "After a few hours on the road, we decided to pull over and get time for nice scenic pictures and to let the buses cool down and not overheat. Something about us: We both march euphonium for the Madison Scouts and are returning for this upcoming season. "We are both 17 right now and are seniors at Seguin High School in Seguin, Texas. Next fall, we will both be attending Texas State University-San Marcos. I will be majoring in music education and Stephen will be majoring in engineering. "It was an AWESOME experience to make many new friends and brothers and definitely become closer to my twin brother as a Scout brother with the amazing history of the corps that started in 1938. May you never walk alone." Thanks Adam!
E-mail your Forzato submissions -- and we will get to them all, in time (and we're posting them in the order they were received) -- to dave@dci.org along with where and when the photo was taken. Send some biographical information about yourself as well. We'll give you full credit. Also, let us know if you want your e-mail address included.