I met Lou Sikora atop Ames Field in Michigan City, Ind. He promised me to share his story, and then a few weeks later, I was delighted to receive a delightful contribution from his wife's grandson. We'll start with Lou's story. I have been a fan of the drum corps activity for many years. I used to mention to my wife that I hoped some day to be able to travel with a corps and if I should die before I had that opportunity, to have me cremated and stick my ashes in a contra case to go along with a corps. (No grisly humor intended, I was quite serious.) Well, my wife beat me to it and passed away in 1993. When deciding what to do with my vacation time for the next summer, the light came on and I contacted a customer whom I knew was an alum of the Bluecoats, and I asked what I should do to get involved. He gave me a name and a phone number and away I went. I started in the pre-season of 1994 and worked with souvies as well as a number of the other fund raising activities that took place that year. I went on the road for four weeks that summer and have been traveling with the Bluecoats every year since. They became my second family. I remarried in the fall of 1995. My new bride knew my story and the importance of my Bluecoats family. She has never objected to my involvement. When we moved to the Chicago area in 1996, it wasn't always easy to make monthly camps, but I helped in other ways, like finding housing and rehearsal sites for the corps when it was in the area, doing the necessary grocery and doctor runs, and locating the necessary mechanical help when generators on the food truck needed help. In 2001, we moved to Winston-Salem, N.C. which is still a long way from Canton, Ohio, but I continue to give at least four weeks of vacation to the corps each summer. Many people—both in Chicago and Winston-Salem—have suggested that I find a local group with which to work, and ask why I go so far away. But as I have stated before, the Bluecoats are my family. Over these past 13 seasons, I have primarily worked with souvies, but have also helped on the chuck truck and did anything else that was necessary. As I mentioned before, the Bluecoats became my second family and accepted me. They took me in when I needed it the most and I give back in any way I can. If there is anyone out there reading this article that has always wanted to travel with a drum corps, don't wait! Do it now! You don't need to have kids in the corps, just get involved. Contact the group closest to you and volunteer. We volunteers are a team and we do whatever is necessary to make things work. It will have more meaning in your life than you could ever imagine and you will make friends that will always have special meaning in your life. Anthony Webster of Pittsboro, N.C. is the 14-year-old grandson of Lou's wife. He wrote the following for the benefit of his family. MY TRIP WITH THE BLUECOATS DRUM & BUGLE CORPS 2006 During the last two weeks of June, I traveled with my Grandpa Lou and the Bluecoats Drum and Bugle Corps of Canton, Ohio. This is the 13th year of Grandpa Lou's volunteering with the corps traveling and selling Bluecoats souvenirs at competition sites. On this trip with the Bluecoats, I met a lot of the kids in the corps (there are 135) and most of the staff. There were four people that I really enjoyed the most: Rob (one of the bus drivers), Genevive Geisler (operations manager of the corps), Marlita Matthews (color guard instructor), and Miss Tina Guy (a mother of a member who was volunteering and helping out in the food truck). 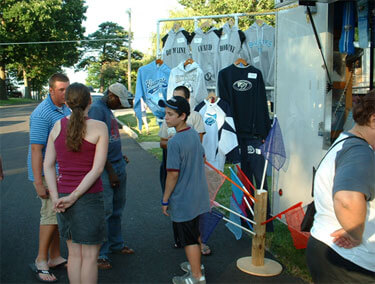 I helped by selling souvenirs: T-shirts, hats, sweatshirts, flags and several other miscellaneous items, and I also helped in the food truck. An alum of the corps, Lisa Pietrangelo, joined up with us at the first show in Toledo, Ohio. She helped Grandpa Lou by sharing in the driving and also by working in the souvenir trailer. In my opinion, she was a pain in the butt because she acted as if she were my mother. On the first night, after the competition in Toledo, I rode with Roger Walker in the equipment semi truck on the way to Lisle, Ill. It was really fun riding in a semi, but I got tired and climbed into the sleeper cab for a quick nap. I slept for three hours, but I swear it felt like only 30 minutes! Although we tried to eat mostly from the chuck truck, one day during the tour while on our way to the stadium in Evansville, Ind., Grandpa Lou and I stopped for lunch at a Chili's Restaurant. I ordered a slab of ribs, a plate of French fries, a bowl of chili, and two root beers. There were 14 ribs in the slab. It was so big that it was bigger than my plate. Grandpa Lou could not believe that I actually ate all that food. 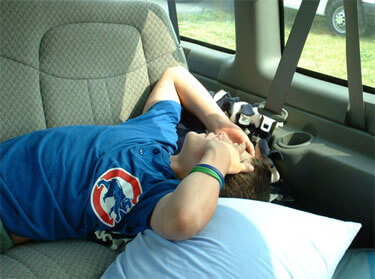 At the competition in Normal, Ill., a fellow by the name of Fred Morris joined up with us. He used to travel with the Bluecoats, but is now the new director of the Troopers Drum and Bugle Corps from Casper, Wyo. The Troopers are inactive this year so he had some time to help us out as well. After the competition, we followed him to the Drum Corps International headquarters in Addison, Ill., and then to St. Charles, Ill., where he lives. He was working with DCI and was returning their truck to its base of operations. We dropped the Bluecoats' trailer at the DCI office parking lot and Grandpa Lou and I spent the night with Fred at his apartment. The following morning we had breakfast at a Greek restaurant where I had a waffle, an order of French toast, sausage patties and some of Fred's Canadian bacon. It was very good. Afterward, we headed to the DCI headquarters to pick up the souvenir trailer and then drove to Michigan City, Ind. where the competition took place that evening. It was our last night with the corps, and the corps did very well coming in second place. Since it was my last night, several people gave me hugs and thanked me for having been there and helping out. 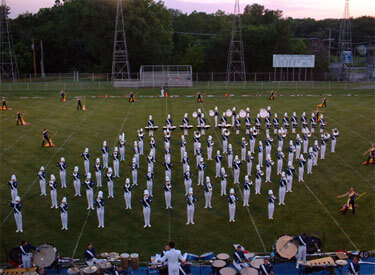 My Mormor (grandmother) came up to Michigan City to pick up Grandpa Lou and me, and we stayed in a hotel that night. Most of the other nights we had slept in our sleeping bags on gym floors! After the competition, Mormor took me back to the hotel to swim for a little while but the pool was closed so I just took a hot shower instead. I watched TV for a little while and then fell asleep. The following morning I swam for a short time and then had breakfast. There were three major lessons I learned during this trip: 1. I learned to never ever mess with Rob, one of the bus drivers, until he has had his morning coffee. 2. Don't play around and try to fool Marlita because she will kick your butt. 3. Use good manners and no elbows on the table when eating. All in all, the two weeks on tour were a great learning experience for me. We traveled more than 3,200 miles and visited seven states. The Bluecoats competed in nine shows and performed one exhibition show. I got to meet a lot of interesting and nice people and got to see just how demanding the life of a drum and bugle corps member can be. If all goes well and I decide to work hard to learn and develop my skills at playing drums, I would hope to march in a drum and bugle corps like the Bluecoats myself at some point in the future.