Sunday, June 1 -- Day 9 Well, once again another day with clear skies. I've never had such luck in the last 3 ½ years with no rain, but I'm sure that I'm just jinxing myself by saying this. It was another breezy day under our pit tree, plenty of shade, but I somehow managed to get my sock tan back. 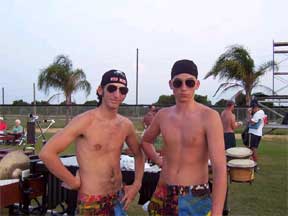 Members of Magic's pit, prior to shopping for new clothes.
As for on the field, we came even closer to completing the entire marching program on the field. Just another couple pages tomorrow and we should be done. I'm just simply amazed how quickly we got everything on the field, now we'll have a good two weeks to clean drill and music on the field before our first show in Sevierville, Tenn., on June 20. The pit pretty much has its entire musical book down, we just have to learn the new intro to our opener. It should be a very interesting intro without a doubt. I've definitely never seen anything like it in my couple years of marching or on any of the videos I've watched. So be surprised to see some really cool stuff when Magic hits the field. On a final note, we finally get some time off Tuesday to do laundry and get a couple other jobs done. The pit will be making a nice long trip to a hardware store and possibly a junkyard to build and buy stuff to make cool sounds with. Hopefully we'll find some more cool items to wear to rehearsal, such as our lovely outfits modeled in the picture attached with this. Saturday, May 31 -- Day 8

Have you ever pushed a 275-pound instrument through a pit of sand, tennis court, up a hill, down a hill, back up a hill, THEN into stadium? Well, that's pretty much what the front ensemble here at Magic has been doing the past eight days. But I can't really complain about that since the pit has only stood in the sun for about an hour over the last week, and it's mainly been while waiting in the food line. As for today, it was another beautiful day here in central Florida, partially clouded skies, a nice breeze, and not TOO hot. We've lucked out and only had rain once since we moved in. I'm still waiting for the daily 5-minute showers to begin, oddly enough, it usually rains around 3:45 p.m. every afternoon, for a couple minutes. It's hot, nasty rain. It was another successful day in full ensemble rehearsal. We should be marching the entire show without a metronome by Tuesday night hopefully. Tonight we put a little more than two-thirds of the show on the field without the metronome. We probably would have accomplished more if the sprinklers wouldn't have came on while we were starting our rehearsal -- they set us back about half an hour. And of course, the sprinklers come on right as the pit gets to the field with their equipment, so we parked our equipment and took a little run through them to cool down. The entire corps has also been in better spirits since last night, since we finally got hot water to come out of the showerheads in the locker rooms. The water wasn't even that cold in the first place, it was a moderate cold -- kinda like pool water. Tons of members have been complaining how freezing cold the water is, but they're in for a big reality check when we finally get to a school where the showers really ARE freezing cold. I just can't wait to finally get out of the state of Florida and onto the rest of the summer tour. There's only so much of this state I can tolerate in the summer. Scherzo archives Fox, 19, is a junior at Florida State University. He played in the front ensemble of the Tampa Bay Thunder 2000 and 2001, and with the Phantom Regiment 2002, and will play with the Magic of Orlando in 2003. Fox will report back from each spring camp, and continue his reports through the summer. Send him e-mail at friceox@aol.com, or instant message him at friceox.