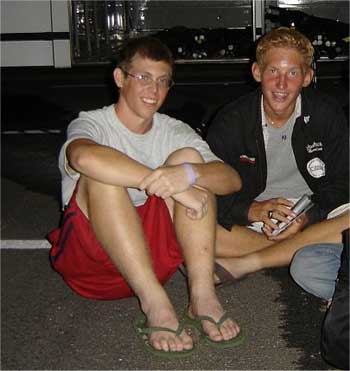 Ross Uber sent in this one. "This was taken on semifinals night in the corps bus parking lot. On the left is myself (Ross Uber, 2005 Madison Scouts mellophone), on the right is Josh Smeltzer (2004-2005 Oregon Crusaders mellophone). I'm 18 and attend the University of Kentucky. Josh is 15 and lives in Hillsboro, Ore. "A couple of years ago, I met Josh through an online game. Realizing we had a common interest in band (he played saxophone at the time), we became fast friends. I sent him recordings of my instrument (the French horn) and convinced him to switch to it. After he was recruited to fill a hole in his high school marching band on mellophone, I sent him drum corps recordings. Immediately becoming hooked, he sought a position in the local corps, the Oregon Crusaders. Because I am singlehandedly responsible for his becoming a brass player and a champion corps member, I finally had the pleasure of meeting Josh in person for the first time on semifinals night." Thanks Ross! E-mail your best shots from the summer to dave@dci.org along with where and when the photo was taken. Send some biographical information about yourself as well. We'll give you full credit. Also, let us know if you want your e-mail address included.