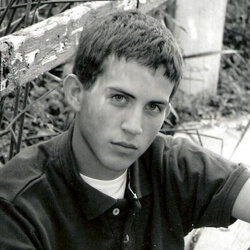 Brian Beck
Brian Beck, 18 Central Washington University Oregon Crusaders Contra, 2008-2009 How did you choose your corps? I knew I didn't have the money to travel elsewhere, so I began to look at local corps that I could get to easily. On top of this, I looked at information about the staff members, previous shows the corps had performed to see if I liked the style, the time commitment involved with being a member of the corps, and of course the cost. I also looked at how the rehearsal camps would work around my family and school schedules. I also made an effort to e-mail staff members to learn more about the corps. E-mailing the caption head instructors and corps directors is probably the best way and most important thing to do when choosing a corps and what I recommend to others. The answers to all of your questions are not going to be on a Web site, so ask, they always respond. E-mailing will also help you establish some familiarity with the staff members so you aren't just another face in the crowd at the audition. This might give you an edge over the competition. Choosing a corps is kind of like college hunting. They all give you a chance to live the drum corps life, but each group will give you a different experience. After you narrow it down, attend an audition camp for each of the corps you are looking to join if possible. In your experience, what's the best way to prepare for an audition? Get a hold of the audition materials and practice everything. Also, choose a solo piece that highlights your abilities but is appropriate for your playing ability. A hard piece won't score you any points if you can't play it. You may or may not be asked to play a solo piece, but it's best to come overly prepared. Try to find out about the corps' marching technique before the audition by watching videos or by asking veteran corps members or the visual staff about it. Practicing in front of a camera will help you see if you are doing it correctly. The most important thing to show at the auditions is a positive attitude, confidence, and a willingness to learn. No matter what level you are at, your attitude will show the staff members how you will fit in with other corps members and how successful you will be in the drum corps. I really can't stress this enough. What can a prospective corps member expect when he/she shows up for an audition weekend? When you show up at the audition, you can usually expect a meeting at the beginning that will give you an introduction to the staff as well as a general idea of the schedule and goals for the rehearsal camp. You can expect basic visual training in posture and marching, and you will generally spend some time playing in individual sections and as a full corps ensemble. The first time you auditioned, was the process different from what you expected it to be? I was surprised that beyond individual abilities and talents, the staff also looks at how well you function with the rest of the corps, your personality, and your ability to better yourself with the instruction they give you. Were you nervous at your audition? I was nervous at the beginning because I felt like I didn't know what I was doing. Before my audition I had never even held a contra (tuba) before. Prepare for the audition mentally, and play the materials in front of your family, friends and teachers. If you are more worried about marching, practice that as well. Be confident. The staff may ask you to make some corrections in whatever you are working on, but don't lose your confidence. Take it into account and use those comments to make yourself better. Remember that the staff members are there to help you, not to break you down. What do you think is most important for someone to take away from the audition experience? You should take away a feeling that you gave it your all and have no regrets. If you didn't make it into a corps with your best efforts, practice hard and come back next year. You may even be able to fill an open spot with another corps if there is one available later in the season. By going to an audition you at least will get an idea of what it takes to be in a drum corps and of the expectations that the staff members have of you. Any other advice? Have an outgoing personality. That way you will get to meet a lot of really cool people and it will make the audition experience less foreign and uncomfortable. Learn more about corps audition dates, locations and additional info.