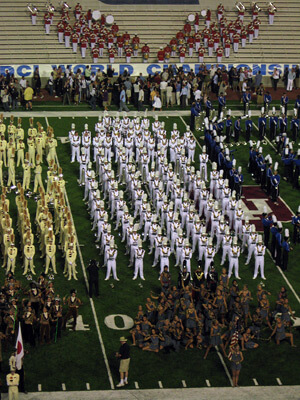 I was browsing through some of the shots I had taken during the '08 World Championship Finals and found this particular shot. I wanted to capture Phantom Regiment at the awards ceremony retreat because my son is a second-year tenor drummer. My goal was to get the corps in frame with the Marines in the background. When I look at the picture after knowing the results, it looks like the Marines are in a "V for Victory," and even the cropping on the DCI banner almost reads "DCI World Champions" in recognition of Phantom's win. This wasn't intentional, but it turned out pretty interesting.