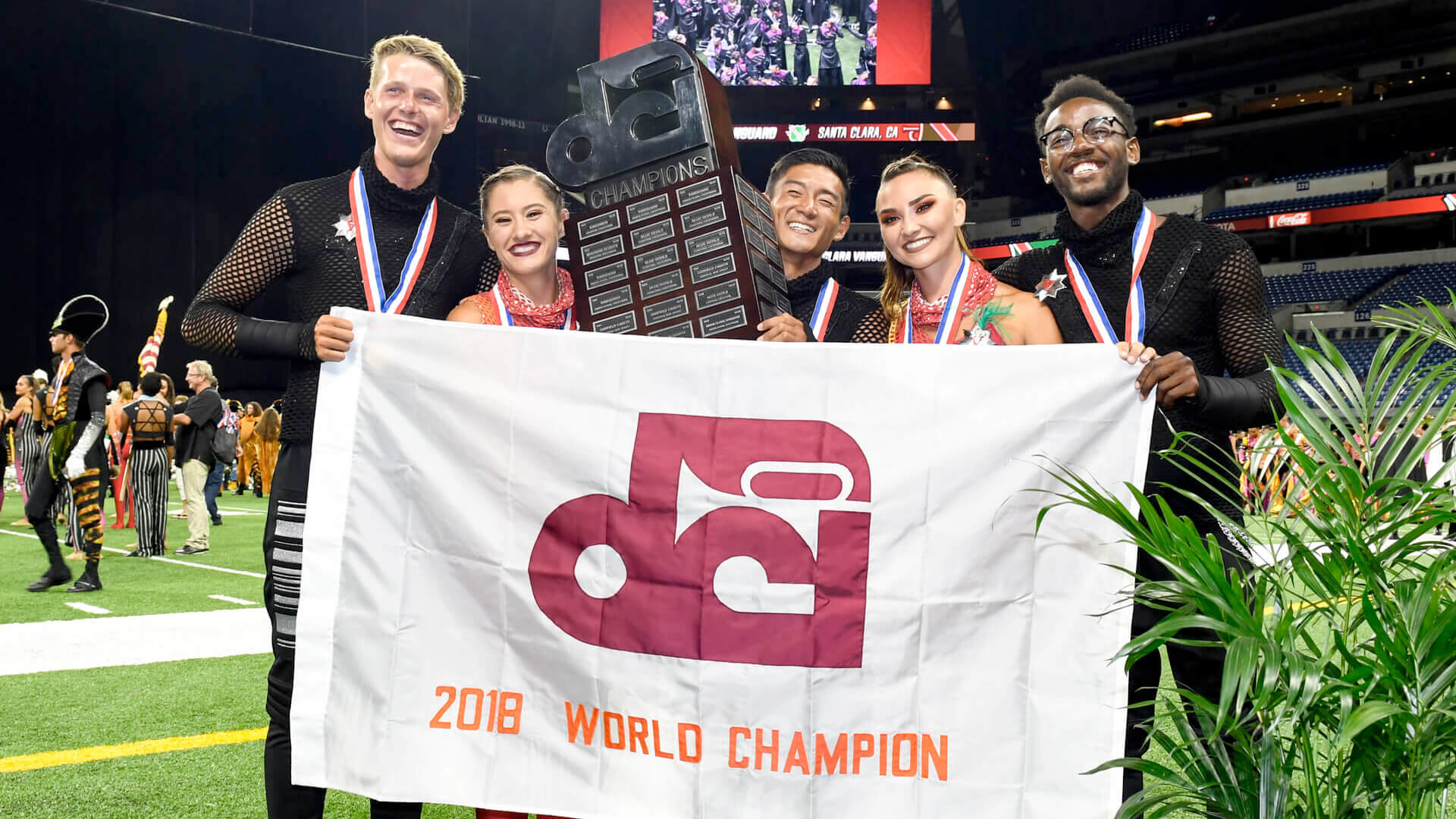 INDIANAPOLIS, Ind. — It started in Stanford.

Santa Clara Vanguard, on June 23 — in a venue where it had never won — earned first place. The corps defeated Blue Devils for the first time in nearly 200 head-to-head meetings, and, most importantly, made a statement.

It was clear even then. Vanguard was for real.

Vanguard fell behind its northern California neighbor the next day, but since then, hasn’t lost at any event on the 2018 DCI Tour.

And with its 22nd-straight victory at Saturday’s DCI World Championship Finals at Lucas Oil Stadium, Santa Clara Vanguard earned its first gold medal since 1999. Along with the gold, the corps took top caption honors in brass, percussion, visual and general effect.

In doing so, the organization achieved World Champion status on both the World and Open Class levels in the same year for the first time in its history.

“It’s pretty amazing to see all the excitement on the field and excitement in the audience,” Vanguard executive director Charles Frost said. “This means a lot ot the entire organization, it’s been 19 years. It’s been a lot of hard work, a lot of ups and downs. The 2018 Santa Clara Vanguard and Vanguard Cadets have been special from the get-go.” 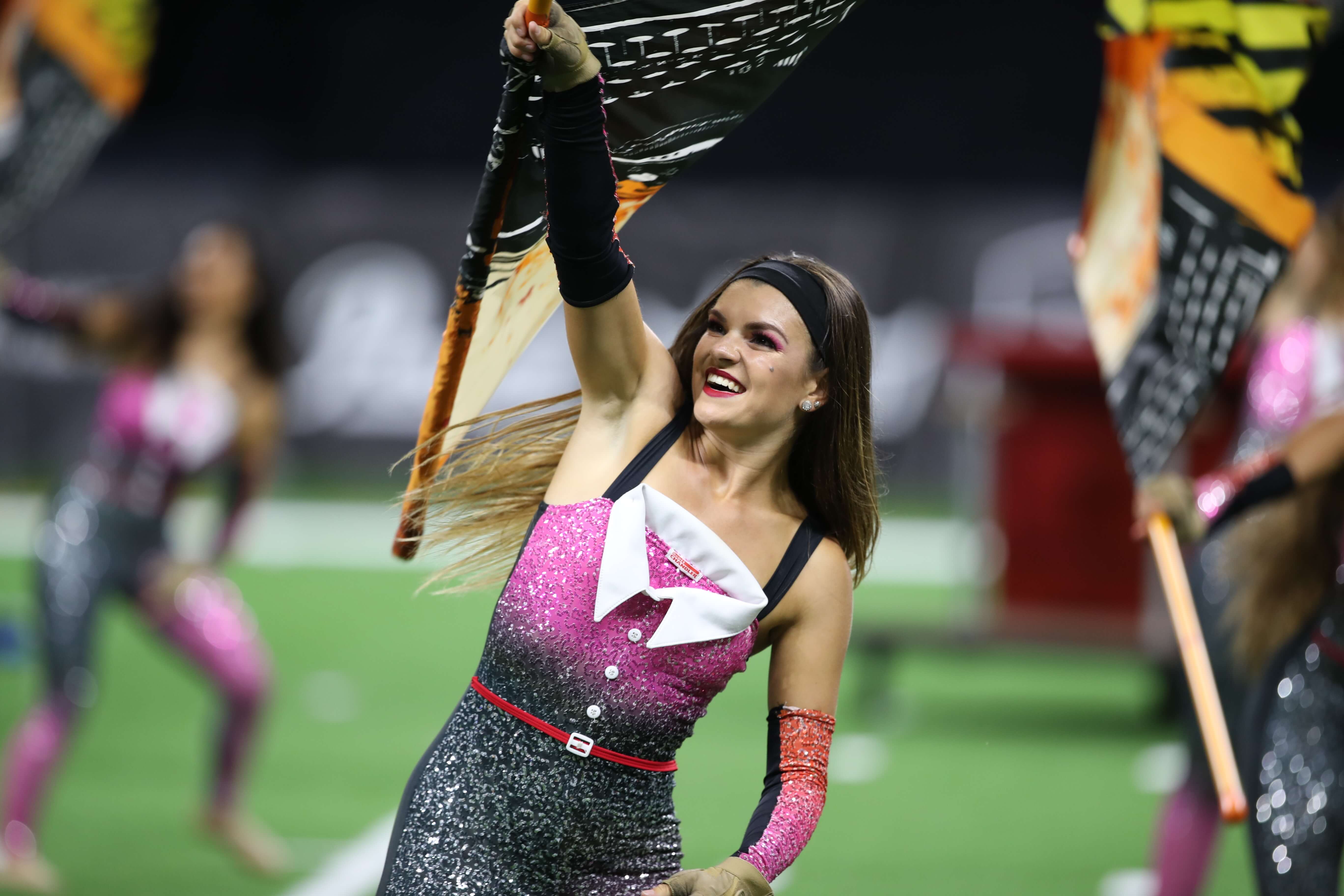 “It’s something special, as it always is, but I think this year especially,” Blue Devils drum major Everett Kim said. “I love these people, and forgetting about what happens at the end of the day, being out there and the feeling you get when you walk off the field is more important than anything that happens after that.”

Bluecoats made a late surge toward the finish line, erasing what had been a 1.5-point deficit to finish less than a tenth and a half off the Blue Devils in Friday’s Semifinals. While the Canton corps fell just over half a point shy of second place, it returned to the top three for the fourth time in five years with its first bronze medal since 2015.

“It was a special show, a special year, and that was just a really special performance that the crowd ate up every step of the way,” Bluecoats executive director David Glasgow said. “No matter what the scores are, or the placements, that’s how you want to end. You want to end with that feeling, and that’s what we did tonight.” 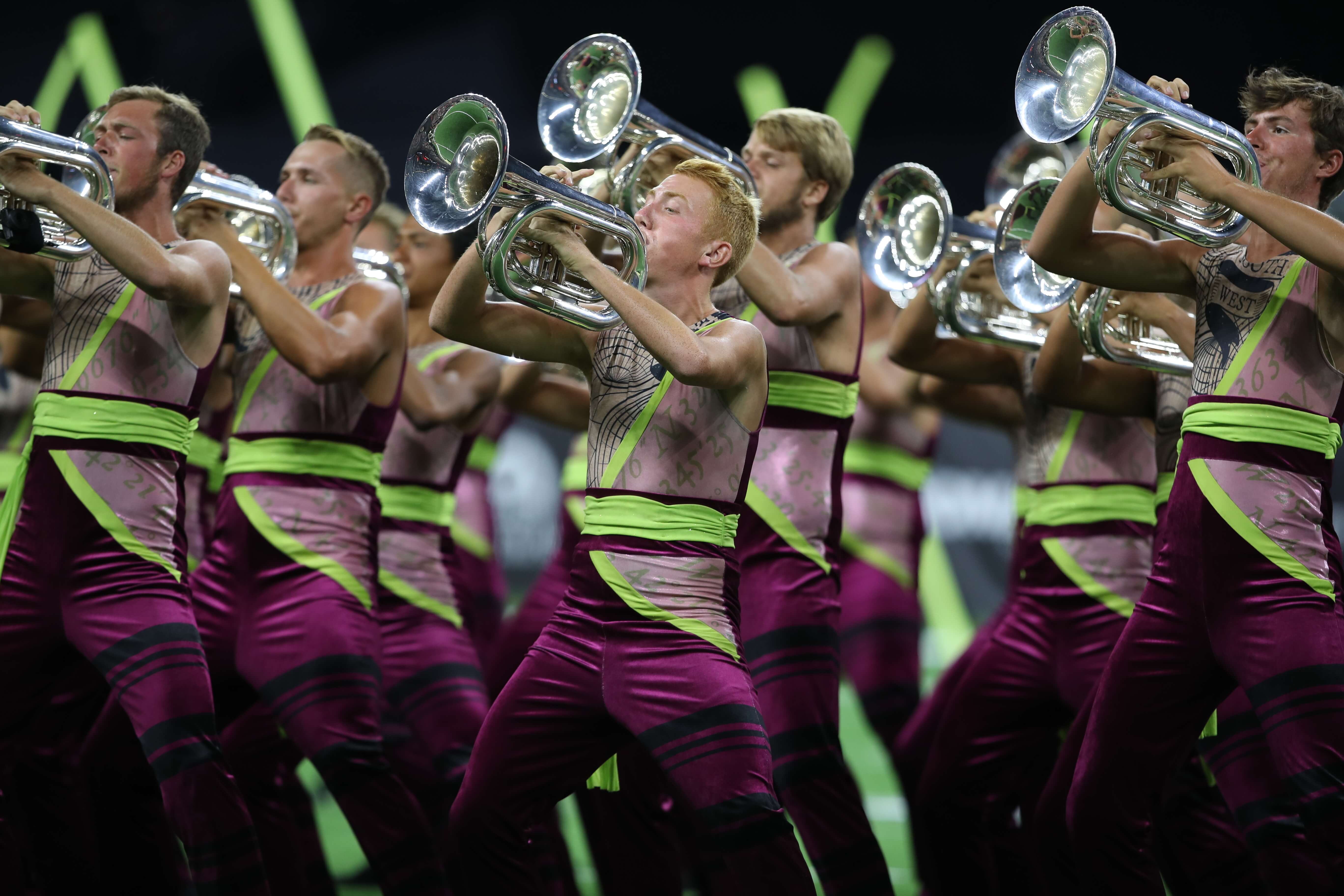 Carolina Crown made it a decade of top-five finishes with its fourth-place ranking Saturday night; the corps first cracked the top five in 2008 and hasn’t fallen out since.

As it has for most of the season, Crown once again posted impressive scores in the music captions, scoring as high as second in brass and third in percussion, leading to a third-place result in total music.

“They had such amazing performance energy and they just wanted to be the beasts,” Carolina Crown drum major Elayna Youngson said.

Saturday, Boston Crusaders returned to the top five for the first time since 2002 and shattered their record score — 92.963, set last season — by more than a point. Boston also earned its very first George Zingali Award for Best Color Guard Performance.

“I feel incredible,” Boston color guard member Alex Hastings said. “I couldn’t be happier with my age-out season. I started off in ‘16 when we were in the bottom of the Top 12, and now we’re working our way to the top, it’s absolutely incredible.”

The Cavaliers earned their fourth top-six finish in the past five years, posting impressive scores in color guard and percussion.

“I’m feeling incredible,” Cavaliers corps director Joe Roach said. “Myself and a few of the other staff members were saying it’s crazy the amount of work that goes into 11 minutes of pure adrenaline, but that’s what we had tonight with The Cavaliers. It was amazing.” 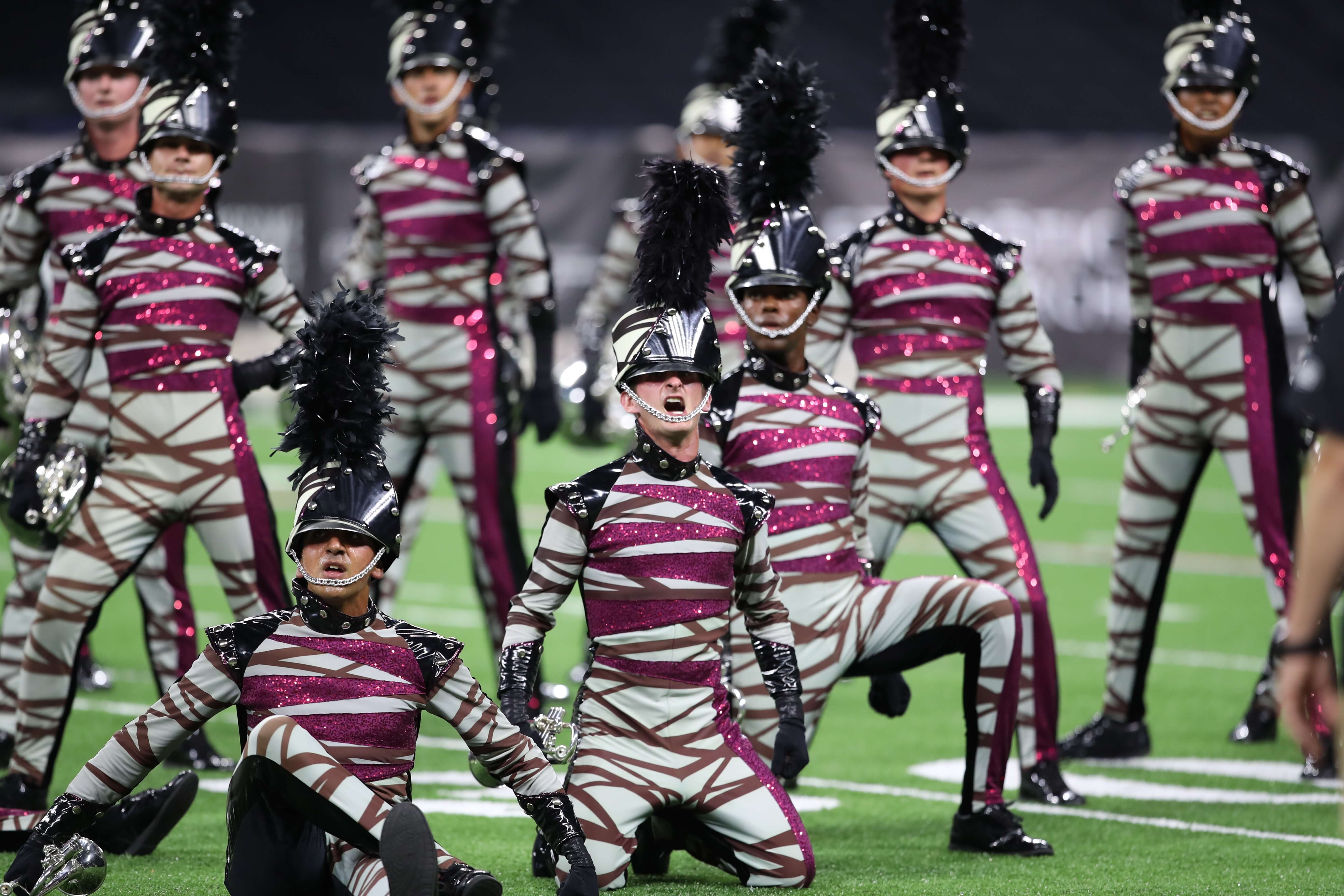 Matching their finish from 2017, The Cadets improved upon last year’s final score by about half of a point. For Claire Albrecht, 2018’s recipient of the Jim Jones Leadership Award, Saturday’s performance marked a meaningful conclusion to her three years with the Allentown corps.

Blue Stars put the finishing touches on an impressive season with their first top-eight finish since taking eighth in 2008, 2009 and 2010. Since the start of the season, the Blue Stars recorded the largest score increase of any corps, improving by more than 28 points from their season-opening result.

“We definitely have learned how to fight,” Blue Stars drum major Taylor Smith said. “At first, it was a struggle, so I’d say that the way the summer has gone is just that the group is learning to fight and learning to fight together.” 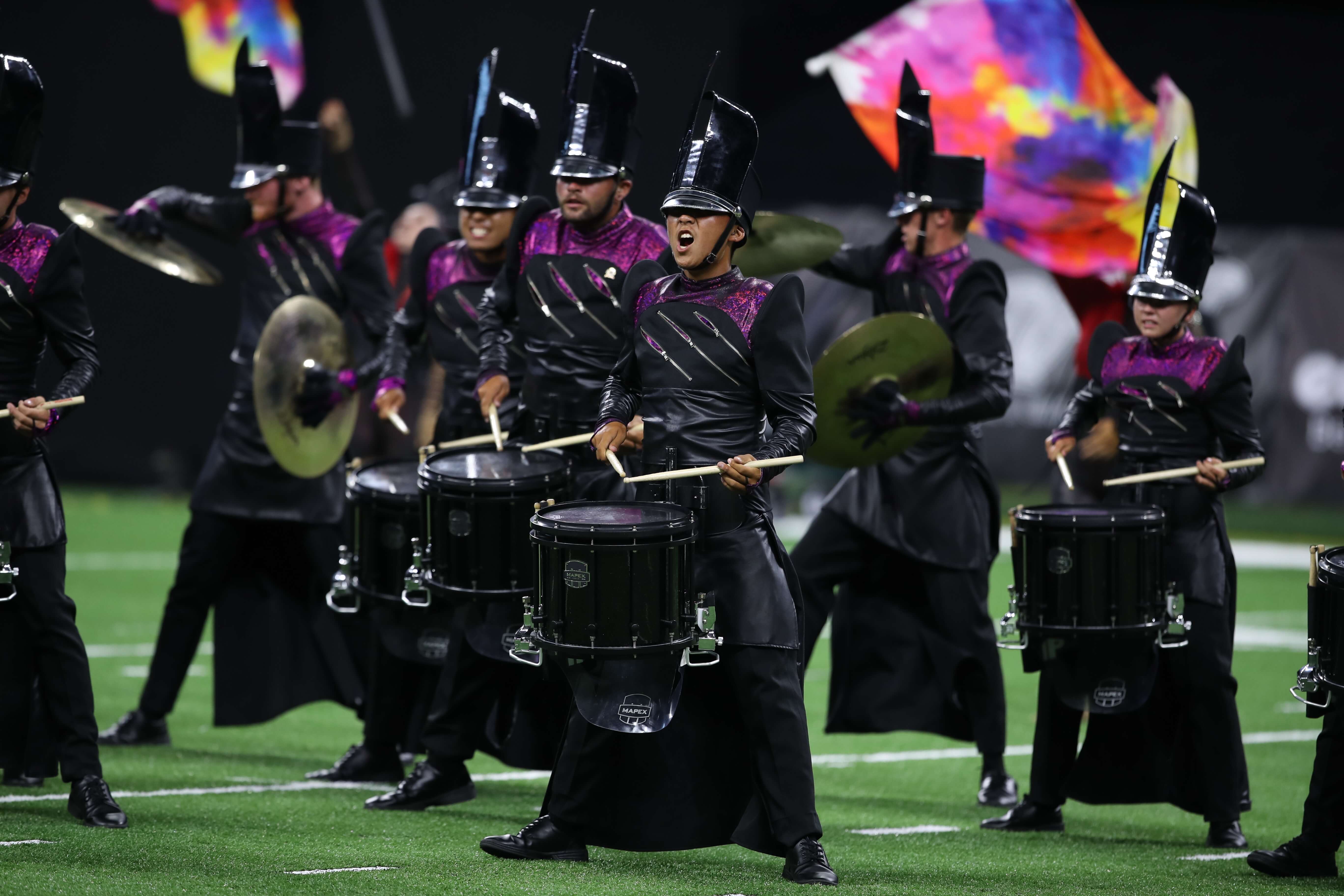 Saturday night, Blue Knights locked up a seventh consecutive top 10 finish. Despite falling to Mandarins in general effect and total visual, the Denver corps used a commanding advantage in total music to keep its ninth-place position.

“I’m feeling great,” Blue Knights drum major Daniel Belcher said. “I’m feeling a little overwhelmed with emotion; that was it. That’s three months of hard work, that’s everything I believe in, this organization, this drum corps, everything. I know we gave it everything we had.”

In their first Finals appearance, the Mandarins soared, locking in their very first top 10 finish. The Sacramento corps once again impressed in the visual captions, scoring as high as ninth in color guard and total visual.

“My rookie year, this corps got 21st place,” Mandarins drum major and fifth-year member Kiri Guldner said. “No one would ever have believed that the Mandarins would make it to Saturday night. I’m just honored to be part of an organization that has grown so much and is not stopping.”

Phantom Regiment increased its streak of Finals performances to 45, while fending off Crossmen by just two tenths of a point.

“That was absolutely incredible,” Regiment drum major Claire Wilcox said. “It was emotional, it was vulnerable, it was explosive with energy, I’m speechless again, they take the words right out of me.”

Crossmen wrapped up its 2018 season with a sixth Finals appearance in seven years. The San Antonio corps matched its closest deficit to Phantom Regiment of the season with Saturday’s result.

“That was the best final run we could’ve asked for,” Crossmen drum major Randall Himes said. “I’m so proud of them, I love it.”