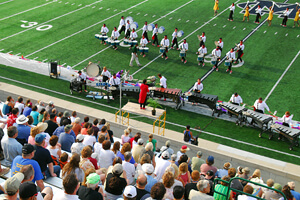 Velvet Knights perform at the 2009 Open Class
Quarterfinals in Michigan City, Ind.
Drum Corps International today announced that the Open Class Velvet Knights Drum and Bugle corps will not participate in the 2013 DCI Tour. "We're anticipating that the Velvet Knights organization will take this opportunity to review its situation and regroup and reorganize for a future petition to return to DCI's Open Class," DCI Executive Director Dan Acheson said. Drum Corps International will continue to work with the board of directors of the Pasadena, Calif.-based Velvet Knights Youth Arts Organization to assist them with restructuring for potential participation in future DCI Tour events. Debuting as an Open Class corps in 2007, Velvet Knights last competed at the DCI World Championships in 2010. The corps participated in a limited number of DCI Tour events in California during the 2011 and 2012 summer seasons. VKYAO.org